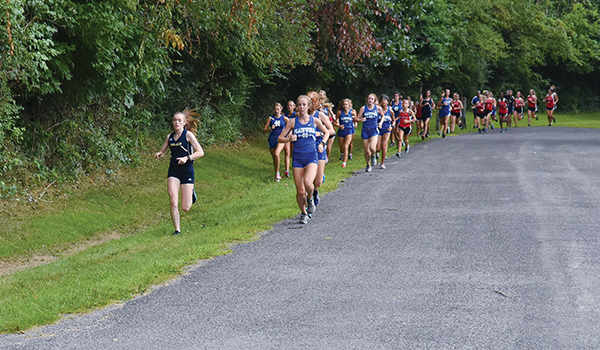 Due to MHSAA restrictions, Niles will have to run its home cross country meets at Dowagiac this year. (Leader file photo)

NILES — With the Michigan High School Athletic Association releasing its “phase-in” return to sports last week, it has left many area cross country teams scrambling to find a new home.

In its return to play guidelines, the MHSAA said that regular season invitationals and multi-team competitions would be limited to 70 runners per race. That means events like the Niles Stampede or the Dowagiac Rock-N-Run will have to dramatically change how they are run or be canceled all together.

The Portage Invitational, which is run each October, and is one of the biggest cross country races in the state of Michigan, has already been canceled. There has been no word yet on the annual Berrien County Meet, which easily has more than 70 runners for both the boys and girls races.

Niles will not be able to use its course at Madeline Bertrand Park, according to Viking coaches Tony Todd and Jami Foster.

“We cannot use our course, so we asked Ron Gunn if we could use Dowagiac’s course,” Todd said.

The Vikings are no strangers to that course having used it previously for its home meets before switching to the Bertrand Park course.

“We do have to change our home course because of how narrow it is, so we are pretty hopeful it will be on the Dowagiac course,” Foster said. “Not sure about spectators yet.”

Niles was scheduled to have a coaches meeting Tuesday to discuss how each sport would deal with the MHSAA guidelines.

Dowagiac’s course may not look like it has in the past due to the new guidelines. There are several areas on the course, especially in the trails, where it gets narrow.

Second-year Dowagiac coach Maria Kulka said she was going to measure parts of the course this week.

“I think it will need reconfiguration,” she said. “This will be difficult though, as the majority of our home course is in the woods.”

Like Foster, Kulka said she will be seeking the guidance of Dowagiac Athletic Director Brent Nate as it pertains to spectators.

Brandywine is not scheduled to host any home meets this fall due to the construction of its new tennis courts.

“Right now, we are not going to run on our course,” said Bobcat Coach Terry Borr. “We will have to redesign the course once the tennis courts are finished.”

Borr said he has not heard what the BCS Athletic Conference is planning as far as the conference meet is concerned.

“We are going to have more than 70 runners in each race with the addition of South Haven and Niles to the league,” he said.

DOWAGIAC — Due to a recent resignation on the board, Dowagiac Union Schools is seeking interested applicants to fill a... read more