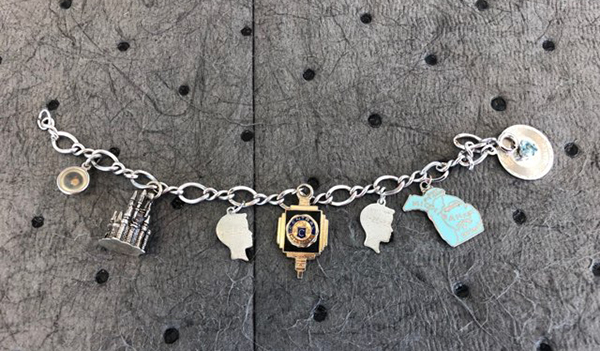 NILES — Each charm on a charm bracelet bears a different meaning to its wearer.

Throughout the past 37 years, Niles High School secretary Rhonda Fletcher knew this and kept special items safe in the school’s “lost and found,” including a bracelet reunited with its owner on Wednesday.

Sherry Whittaker lost her charm bracelet sometime in the late 1970s or early 1980s, according to her son, Mark Whittaker. Mark graduated from Niles High School in 1985, and his brother, Jeff, graduated in 1981.

As Fletcher was cleaning out her belongings to make way for her replacement, she brought two containers from her desk filled with unclaimed jewelry, watches and pins to the school’s principal, Molly Brawley, for her to look at.

“She would put [unclaimed items] in the boxes and store them safely,” Brawley said. “As I was looking through the containers, a charm bracelet caught my eye, and I looked at each charm. There were two small ‘silhouette’ charms with engravings on the back with the names Mark and Jeff, and what I assumed was their birthdates.”

Brawley contacted Mark Whittaker over social media, and he confirmed the birthdates were his and his brother’s.

“I called over, and [the school’s] best guess is that it was a lost and found issue after an event over 30 years ago,” Whittaker said. “That charm bracelet has so much meaning to her. It’s not just my brother and I on there.”

He called his mother, Sherry Whittaker, to come to Tyler Chevrolet, 1810 S. 11th St., after she finished lunch.

There, he presented his mother with her bracelet as the other sales people joined in to celebrate with them.

Sherry was surprised to receive the bracelet, lost so long ago.

“I was just crushed when I lost it,” Sherry said. “I don’t remember the day I lost it, I just remember thinking ‘I can’t replace it.’”

Sherry graduated from South Bend Central High School, and had her varsity charm on the bracelet, in addition the silhouettes of her sons and charms significant to she and her late-husband, Lenny.

“It makes it all the more important because I lost my husband to Agent Orange in Vietnam in April,” Sherry said. “We had the celebration of life ceremony on Saturday. It’s all the things that I get back that tie me to everything else.”

Lenny, a Vietnam veteran, passed away on April 20. Due to COVID-19 gathering mandates and precautions, the family hosted a celebration of life for him on July 25. The bracelet was reconnected with Sherry four days later.

“I’m going to keep it on for a while,” Sherry said. “It’s just one of those things that everything you put on it means something.”

According to Brawley, Fletcher’s retirement means a bit of history will also leave with her on Friday. Fletcher has worked for Niles Community Schools since 1983 in the high school office. She has kept the school’s community calendars back to 1993, has photos of the school’s expansions, has kept projects students have worked out and has a graduation program from each year she has worked at the school.

“If she doesn’t understand her value, this proves it to me,” Brawley said. “Look at the joy, because of [Fletcher’s] diligence, keeping and caring for things that may not matter to someone else. She has cared for things, and helped return a bracelet very important to someone 30 years later. That’s typical of what she does.”