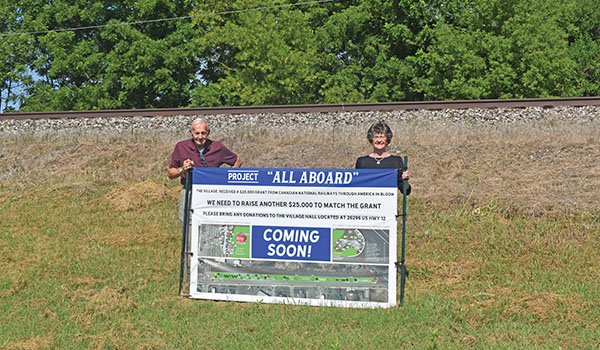 EDWARDSBURG — A community beautification project months in the making is moving full steam ahead in Edwardsburg.

Earlier this year, Edwardsburg received a $25,000 matching grant from America in Bloom, which partnered with Canadian National Railway to add landscaping to a 1,700-foot stretch of railroad tracks on M-62 from US-12 to Elkhart Road. Working with Tobin Landscape, located in Niles, the project, called the All Aboard project, will add trees, flowers and signage to the area.

Now, landscaping has begun, and the project is between $3,000 and $4,000 away from matching the grant. According to Ontwa Township Supervisor Jerry Marchetti and County Commissioner representing Edwardsburg Roseann Marchetti, residents can expect to see the project completed by the end of the summer.

“This is something we have really been looking forward to,” Roseann said. “We are at the point where the community is already starting to see changes.”

At the time the grant was received, officials said it was an extension of Edwardsburg’s visioning project that worked with a Michigan State University team in 2019 to create a plan to make aesthetic and quality-of-life improvements to the village and Ontwa Township.

“The groundwork has been laid,” Jerry said. “We are ready to see this move forward.”

Initially, work on the landscaping project was set to start in March, but was halted due to the COVID-19 pandemic. Despite the delay on the project, The Marchettis said the Edwardsburg community has been overwhelmingly supportive of the project and throughout the fundraising process.

“We’ve been really impressed with the number of businesses and residents that have supported this,” Jerry said. “It just shows how much people want to be connected.”

“We’ve had so much community support,” Roseann added. “It’s been wonderful.”

To thank those who donated to the project, Roseann said both the village of Edwardsburg and Ontwa Township would have a display listing the donors to the All Aboard project.

Both Roseann and Jerry are excited to see the All Aboard project completed, believing it will add to the area’s visual appeal. They added that they hope the project will inspire business and property owners to make other visual improvements in the area — something they are already starting to see.

“It will greatly improve the appearance of the village,” Roseann said. “[The landscaping area] is almost the gateway to the community when you are driving in, so to remove an eyesore is everything. This is a great thing for Edwardsburg.”

City of Dowagiac partners with Mno-Bmasden on business incubator service

DOWAGIAC — A Dowagiac business group is teaming up with the city of Dowagiac in hopes of cultivating new, local... read more