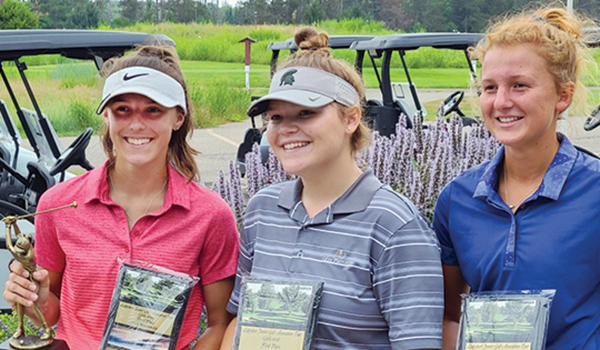 DOWAGIAC — Greta Whitaker is no stranger to playoff golf.

The Bethel University-bound freshman needed a playoff to become the first Dowagiac Union High School girl to qualify for the state finals last fall. She has had to survive several playoffs during the Lakeshore Junior Golf Association Tour to reach the championship round on Monday at Hawks Head in South Haven.

Whitaker needed a playoff to wrap up the Girls 16-18 Division championship Monday afternoon.

Whitaker took a 10-stroke lead into the final round of the two-day championship tournament, which started last week at Lake Michigan Hills.

Allegan’s Emma Franklin, who has competed regularly with Whitaker in the Wolverine Conference, came storming back to force a playoff on Monday.

Whitaker sank a long putt on the second hole of the playoff to claim the championship.

Becca Guernsey, of Dowagiac, finished runner-up in the Girls 13-15 Division after finishing with a 115 on Monday. Of St. Joseph, Marley Waters shot 100 at Hawks head to win the title by 28 strokes. St. Joseph’s Regan Igoe was third.

The Collegiate Division championship went to Nick Brausch, of Paw Paw, who shot 81 on Monday. Jeremiah Guernsey, of Dowagiac, was the runner-up after shooting an 85. Stevensville’s Stuart Clark took third place.

Ryan Guzzo, of St. Joseph, won the Boys 16-18 title by a whopping 33 strokes over Landen Thompson, of Baroda. Nathan Marohn, of Stevensville, was third.