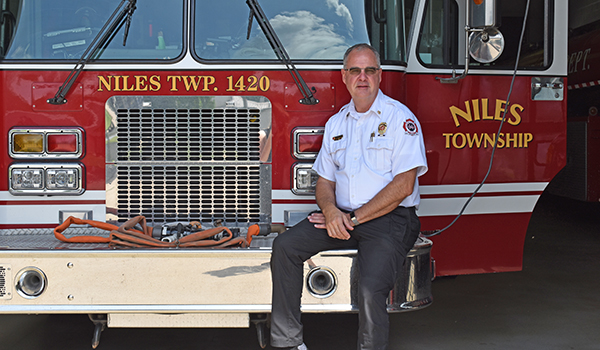 NILES TOWNSHIP — Walking through the Niles Township Fire department, 2049 S. Third St., Chief Gary Brovold knows every inch of the building. He knows it, because he was there when it was constructed in 2005.

Brovold can tell a visitor about the history of each truck in the garage, the vast changes in gear he has used through the years and the history of the department before he arrived. For example, the department was the first fire department in Michigan to use the “Jaws of Life” in 1972. The station still houses the Hurst JL-32 hydraulic Spreader after its retirement in 2002, and Brovold has it proudly displayed in the station’s training room next to photos of the crew through the years.

Now, after 37 years in the fire service Niles Township Fire Department’s Chief Gary Brovold will be hanging up his gear one last time as he retires on Aug. 1. He has served as fire chief in the department for just over 16 years.

During the Niles Charter Township’s regular board meeting on July 20, township supervisor Jim Stover read Brovold’s resignation letter. He has served as the department’s fire chief since 2004.

“The opportunity to serve the residents of Niles Township has been filled with moments of joy and heartbreak,” Brovold’s letter said.

During the meeting, Stover said, “We knew this day would come. Eventually we lose the good ones.”

Throughout his time with the department Brovold has felt joys and heartbreaks as he served his community as a volunteer, career firefighter and finally fire chief.

Brovold was on-site as his childhood home burned on S. Third Street, years after his family had moved elsewhere.

“I was up by the old Ready Theater when the [call came in], and they said there was a structure fire on S. Third Street,” Brovold said. “I got goosebumps, because it was the house I grew up in.”

He was able to expertly tell his crew members on-site how many feet and where to turn when they entered the home because he had the space memorized. He later called his mother and told her that their house had burned down.

Looking back on his years of service, Brovold said the brother- and sisterhood the department has with one another helped celebrate the highs and handle the lows. After each traumatic call, the firefighters who were on the scene circle up in the station’s training room and work through it with the critical incident stress management team from the county.

“There’s a big circle, and everyone goes around the room and talks about what their role was, how they felt about it,” Brovold said. “It gives everyone the chance to vent afterwards amongst just those that were there. You can’t always go home and tell your family everything you’ve done for the day. It’s helpful to have those types of options in this field to go over some of the heartbreak that you suffer through.”

Another memory Brovold recalled was being able to administer oxygen to two pets who had gotten lost in the panic as a family left their home to safety. The two dogs were in rough shape from smoke inhalation, but with the use of donated oxygen masks, Brovold’s crew was able to bring them back.

“The dogs, for one of their children, was their service dog,” he said. “The fact that we could do that, the family was so thankful.”

Brovold said those were the moments where the joys came in.

“Not to say there’s not an emotional loss with the things that you lose, but those can be replaced,” he said. “People and pets, not so much.”

Brovold said he never dreamed of becoming a firefighter as a child. His first exposure to the fire service was as a member of his company’s fire brigade in 1977. Working at Western Electric, which would later become AT&T before the facility closed down in the mid-1980s, the company’s building was about 600,000 square feet, according to Brovold.

“I went through the training, and during the training, we had the opportunity to work with the Bertrand Township fire department,” he said.

The fire fighters who were a part of the training exercise for the company’s brigade brought out the hoses and hooked up the fire hydrant. Someone in the department mentioned joining the fire department to Brovold.

“I was kind of oblivious as far as fire departments,” he said. “I put in an application and got hired as a volunteer in July 1983. Then in 1988, I applied for a career position. Somebody else was hired, and they lasted for about a year, and then they offered me the job. I quit my fulltime job at AT&T and became a career firefighter.”

Throughout his career, he has seen many changes in fire gear and with the amount of knowledge firefighters must continue to learn.

“Every house fire anymore is a hazmat scene,” he said. “Before, you didn’t have to worry so much about breathing the smoke, because you didn’t have so many toxic things. Nowadays, we’re taught that you don’t inhale the smoke. You have to cover yourself with an air pack. We always worry about those firefighters that forget where they’re at and start inhaling.”

Brovold said another new thing firefighters have had to continually learn about is hybrid and electric cars. Not knowing how to properly address fires in vehicles with these engines can result in electrocution.

“One of the things one of my older firemen said, and we all do, is ‘the day you stop learning in the fire service is the day you should get out,’” Brovold said. “You have to learn with the changes in the industries.”

As Brovold steps away from the fire department, taking on a new role as a logistics manager in South Bend, he will have to learn a few more things.

“It’s just time for a change,” he said. “It was not an easy decision to make, even though I knew I had something good sitting in front of me as an offer, it still wasn’t easy to do. It’s just time for me to move on and let someone else come in, and for me to be able to enjoy a little slower pace.”

Through the years, as he has spoken to new hires in the department, he remembers telling them the department is a place they can “be all they can be.”

“The ones that are really enthused about [being on the department] and really want to do it, I tell them, ‘nothing stops you, sitting in that chair, from sitting in my chair, other than you,’” Brovold said

Practice may begin, but no competition for football, soccer,…