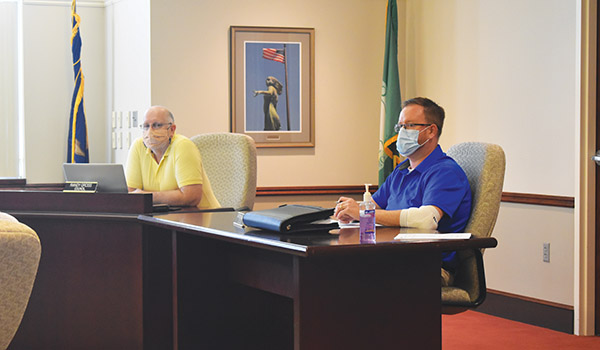 DOWAGIAC — After months of Zoom meetings due to COVID-19 gathering restrictions, the Dowagiac City Council met in person, ready to approve a number of resolutions — including two geared toward improving the city’s dining and entertainment.

Monday evening, the Dowagiac City Council hosted its regularly scheduled meeting. On the agenda were two resolutions that would increase outdoor dining and entertainment.

First, the council approved a resolution to construct a bandshell/pavilion in cooperation with the Dowagiac District Library.

Over the past year, the city and library have been working cooperatively to develop a pavilion that will serve a dual purpose of providing space for the community concert series and outdoor activities of the library. A location and design have been agreed to, and the contract manager has secured pricing for the project budget of $85,000, with capital project funds to be used for the project.

According to City Manager Kevin Anderson, the bandshell would be used for library programs and city events, such as the Summer Concert Series.

“Think this is going to be some great community space,” Anderson said.

The second resolution was to authorize the city manager to write a letter to the liquor control board to allow Wood Fire Trattoria to have outdoor seating on the city’s sidewalk. The resolution further authorizes the development of a license agreement for outdoor seating.

“Recently, the council has indicated a desire to promote outdoor restaurant seating in the downtown because of the ambiance that it can bring downtown,” Anderson said. “Additionally, in this time of the pandemic, more people are desiring outdoor eating opportunities.”

According to a memo sent by Anderson, all outside seating tables must be 25 feet from the door, safe pedestrian walking distances must be maintained, and while a fence is not required due to current orders, some sort of visual barrier should be maintained.

While the letter of recommendation applies only to Wood Fire, Anderson said the resolution provides a roadmap for the city to use for other downtown businesses that would like to offer outdoor seating.

“This opens the door for us to be able to do this more quickly,” he said. “We want to keep the ball moving and get these requests approved quickly.”

“If this situation comes to fruition, the Dowagiac Business Partnership Center would be built on

the City-owned lot next to the James Snow Building,” Anderson wrote in a memo to the city council. “The building is proposed to be the new home of Mno Bmadsen, along with other tribal offices. There is also proposed space to house business incubators. Sometimes these incubators are also called accelerators because they allow new, small businesses to be housed in a low-cost space where the new business can grow without having to balance a heavy overhead cost.”

Through the EDA grant and potential other funding, Anderson estimates the building could be funded at of rate of 80 percent.

The $196,000 grant allows the city to build a modular home on a city lot on Parsonage and Spruce streets to actively market the building of new modular homes within the city.

NILES — The Niles City Council met virtually on Monday evening. The council set aside time prior to the meeting... read more