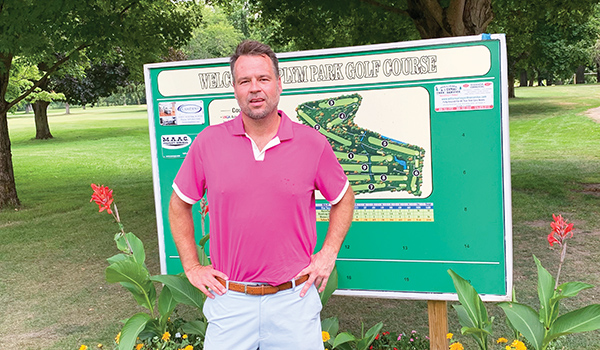 Berger shot 144 to finish 10 strokes in front of runner-up John Hoskins in the two-day tournament. Josh Townsley finished third with a 155.

“I played pretty well,” Berger said. “I really didn’t have a driver I liked, so I stayed with the 3 Wood, and it worked for me.”

Berger got off to a fast start Sunday, which led to the victory.

“I went birdie, birdie, and eagle right at the beginning,” he said. “I almost played too conservative at the end, but I held on.”

Paul Krause, a former Championship Flight winner, captured the A Flight title on Sunday as she shot a 158, which was seven strokes better than runner-up Aaron Kelley. Brett Scott finished third with a 167.

It was the first A Flight crown for Krause, who is also a Seniors Flight champion.

Dave Daniels won his third city golf tournament title, but his first in B Flight.

Daniels shot 176, while runner-up Randy Lujan finished with a 179. Chuck Ditto was third with a 183.

“Played pretty well for 33 out of 36 holes,” Daniels said. “There were three tough holes. A great tournament, and it is a great group of guys. I cannot wait to play in it again next year.”

Daniels prepared for the Niles tournament by qualifying and playing in the Michigan PGA Senior Open.

“I played up there, and that really got me ready to play in this tournament,” he said. “I played some of the best golfers in the state up there.”

Jason Flewellen earned his first city championship as he finished eight strokes better than Bradon Rabler to captured the C Flight title. Flewellen, who felt he could have won the B Flight crown this year, finished with a 170.

“I thought I played pretty well,” Flewellen said. “I probably could have won B Flight, but I have been playing C Flight for about six years, so I decided to stay in C Flight. I finished strong. I had a birdie putt on 18, but I missed it by inches, but it secured it. On the first hole of the day, I hit a 15-footer for par, which kind of relaxed me.”

Will Gadeski was third with a 180.