Mary B. Powell, of Niles 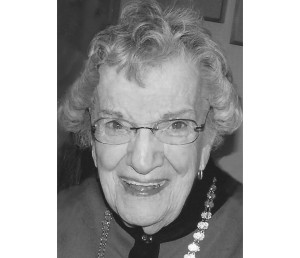 Mary Powell, wife, mother, grandmother, businesswoman, community volunteer and supporter, Republican, champion bridge player and one of Niles’ grand ladies who attained the remarkable age of 103 years died peacefully at 11:20 p.m. on Friday, July 17, 2020, at Woodland Terrace of Longmeadow, in Niles, having never lost her joy in receiving guests.

She continued her education through University of Michigan extension courses and finance and banking classes at the University of Notre Dame. She was first employed at The First National Bank, of Niles, before moving to the Kawneer Company where she served as an executive secretary until her retirement in 1952. She has lived in Niles all of her life.

She enjoyed both the social fellowship and the mental challenge of bridge and was a Charter Member of the Niles-Buchanan YMCA Duplicate Bridge Club, a member of the South Bend Bridge Club and a member of the American Contract Bridge League, qualifying as a Club Director in 1998 and attaining the ranking of Bronze Life Master in 2004.

A dedicated Republican, Mary was elected the 1952 Vice-Chair of the Berrien County Republican Committee and attended that year’s National Republican Convention in Chicago when popular general and war hero Dwight D. “Ike” Eisenhower was nominated for the Presidency.

On April 5, 1941, in Niles, as Mary Lucile Ball she married Ralph L. Powell. Soon after their marriage, Ralph was called to the U.S. Army where his college education and business acumen placed him as a Major in the Ordnance Corps. Mary joined him in temporary residence, serving with the Rock Island Officers’ wives as a volunteer Gray Lady in area hospitals. Mary and Ralph celebrated the remarkable 60th anniversary of their wedding just four weeks prior to his death on May 7, 2001.

She was also preceded in death by their son, Terrill Alan Powell, in 2016; Mary’s brother; and former Niles City Attorney, Keith Ball, in 1967; and Mary’s beloved aunt, Temple Ball Holtz in 2001 who was the third generation of the Ball family to live in the old trading post at North Fifth and Ash streets, in Niles.

The memorial service for Mary Powell will be at 11 a.m. on Monday, Aug. 3, 2020, in the Chapel of the Niles-Buchanan YMCA, 905 North Front Street, in Niles, with the Rev. Dan Greegor, of Sumnerville Bible Baptist Church officiating.

A time of fellowship will follow. Those who prefer to witness the ceremony via the livestreamed broadcast may do so on the Halbritter-Wickens Facebook page: facebook.com/halbritterwickensfuneralservices/. Committal will be private at the Silverbrook Cemetery in Niles.

Mary loved people every day of her life for 103 years! She was always impeccably attired, styled, accessorized and “ready to receive” and entertain. But the sparkle in her eye and the greeting in her voice was the true evidence of the joy that she offered to everyone who was blessed to be in her presence.