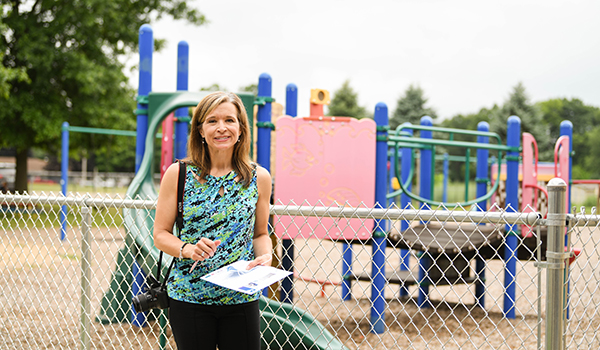 The Niles-Buchanan YMCA will host a Census Celebration event on Monday evening. Jill Haboush, vice president of fund development and marketing for the YMCA of Southwest Michigan, said the YMCA is trying to do its part to support the 2020 census. (Leader photo/EMILY SOBECKI)

NILES — Every 10 years, the U.S. Census takes place to ensure each person living in the country and five territories is counted.

According to the U.S. Census website, “Every year, billions of dollars in federal funding go to hospitals, fire departments, schools, roads, and other resources based on census data. The results of the census also determine the number of seats each state will have in the U.S. House of Representatives, and they are used to draw congressional and state legislative districts.”

The Niles-Buchanan YMCA, 905 N. Front St., will host its Count Us In, 2020 Census Community Celebration from 5:30 to 7 p.m. Monday to encourage more residents to fill out their census forms. The event will offer a free hot dog dinner (bagged and packaged), outdoor Zumba with multiple instructors, crafts and activities, and an inflatable water slide set up in the parking lot. The water slide has been a hit at the Benton Harbor-St. Joseph YMCA, according to Jill Haboush, vice president and fund development marketing of the YMCA of Southwest Michigan.

The Berrien Community Foundation issued grants to nonprofits who wanted to participate in getting more residents to fill out the census form.

“They strongly encouraged nonprofits to request funding to put together some form of an event to help members of communities to complete their census,” Haboush said.

Promotion for the event has largely focused in the area surrounding the Niles-Buchanan YMCA, which has some of the lightest counts of completion right now, according to Haboush.

“We distributed fliers in an old school way to the gas station, convenience store, grocery store, the apartment complexes, because they don’t always readily get counted,” Haboush said. “We don’t know what to expect, but we’re hopeful we will get a good turnout.”

Before the COVID-19 pandemic, the census activities from the Niles-Buchanan YMCA were set to line up with its soup night and after school activities in March and April.

“With everything closed and shut down, it came to a screeching halt,” she said. “The census timeline has been bumped out, but they’re going to start going door to door in the middle of August. The census wanted its partners and participating nonprofits who have funding to host their events before that to draw more completion.”

Haboush hoped the outdoor event will bring people out for a good time, and to complete the form.

“We are doing our part to try to support the census,” she said.

NOVAK: I never imagined it would happen

Since Southwestern Michigan College dropped its sports programs in the late 1990s, the topic of bringing them back has popped... read more