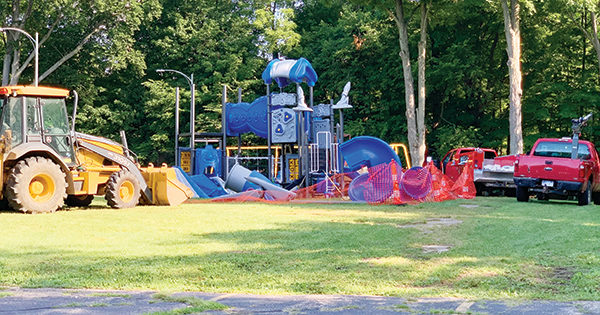 Department of Public Works is nearing completion of the installation of new playground equipment at Clisbee Park. The equipment should be ready for use starting Monday. (Leader photo/SCOTT NOVAK)

CASSOPOLIS — What began as a Sam Adams Elementary second-grade project is becoming a reality at Clisbee Park.

Those upgrades came from a semester-long project at Sam Adams that concluded with the presentation of nine options at the Dec. 9, 2019, regular meeting of the village council. The options range of playground equipment geared toward children ages 5 to 12.

At a combined meeting of the village council and the Cassopolis Board of Education on Feb. 10, updates were given to both entities, including add-ons of a race tunnel, quad pad and climbing rope.

“The second graders picked out three designs, one from each class, then they came up here and the village council voted on who would win, along with the DPW, our staff and some audience members,” said DPW Supervisor Ben Anderson. “We started looking at the cost of it, and they came in on budget.”

Anderson said that when you order $25,000 of equipment, installation costs are not included, Instead of devoting addition funds toward installation, the DPW decided it would do the installation.

“To stay within budget, we had to take that on was one of our yearly projects,” Anderson said. “It is such a big project, some of our other projects had to slow down and be put on the back burner until that was completed.”

The DPW had some early issues setting up the equipment as the area where it was being installed used to be the site of an old school. Apparently, the school’s bricks were used to help fill the hole when it was torn down.

“We brought our post hole diggers,” Anderson said. “We even have a gas-powered post hole digger, so we thought we would rip through these pretty quick and get these posts cemented in and let them sit and come back here on Monday. It did not work out that way. We started digging and got about 6 inches in and started finding bricks — full bricks. We kept trying to muscle our way through it.”

One of his workers suggested bringing out the Vactor truck.

“We thought we could just such the dirt out and hydro-excavate,” Anderson said. “We started doing that. It worked so quickly we were hitting more bricks just like that. We started looking in these holes and they were still physically mortared together. It was like they knocked the top of the school off and covered it up with dirt. The foundation of this thing is going to be solid.”

The project is nearly completed, and according to Anderson, it should be ready for children to play on starting Monday.

At the last village council meeting, several residents from Lakeshore Drive voiced their displeasure about how Stone Lake was treated for weeks this year.

Several members of the Stone Lake Board met with residents while the council was in a closed session on July 13 to discuss how to make things right.

A meeting was hosted recently with residents, lake board members and Progressive A&E, the company used to treat the lake.

According to Village Manager Emilie Sarratore the meeting was productive.

“They were able to work out a solution,” she said. “There was still some money left in the budget to treat the lake. The lake board approved using the money and the lake is going to be treated this week.”

CASSOPOLIS – An Edwardsburg teen found with sexually abusive materials has a chance to keep a child pornography conviction off... read more