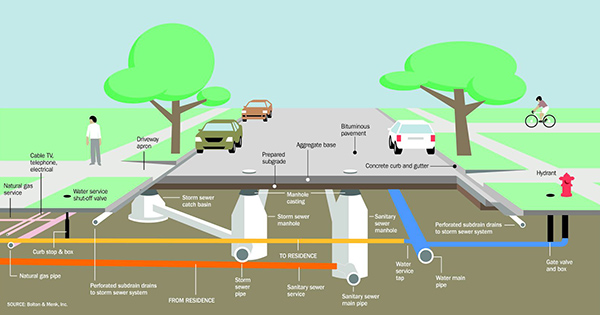 Infrastructure being installed for Cassopolis streetscape

CASSOPOLIS — The Cassopolis Streetscape Project continues mainly along Broadway and State streets as essential infrastructure must be put in place before the rest of the project can move forward.

According to Village Manager Emilie Sarratore, the visual improvements will begin to take shape after the infrastructure has been put into place.

“At first glance, it may look like we are just ripping up the roads and repaving, but the real work is being done under the surface,” she said. “We are in the process of replacing our water mains, water service taps, fire hydrants, sanitary storm pipes and curb and gutter in the downtown area. Over time, the old steel pipes and lines can become corroded, causing leaks and malfunctions that call for costly repairs. By updating these systems now, we will have safer, more reliable systems for years and years to come.”

The Streetscape Project, which was nearly five years in the making, began in mid-June as Selge Construction out of Niles began tearing up and removing the pavement along Broadway and State streets. Once the project’s infrastructure portion is done, work will begin on pedestrian crosswalks, new landscaping, and public seating.

The village has already completed the project on N. O’Keefe Street, which was completed two weeks ago. That project was the first to begin because of the Cass County Fair, which was canceled last month.

Still to come is the project on Lakeshore Drive to downtown connector/boardwalk project and the beach, pier and promenade project. All projects are still scheduled to be completed by the end of 2020.

DOWAGIAC — The Cass County Clerk paid the Dowagiac Rotary Club a visit on Thursday. Not to collect a payment... read more