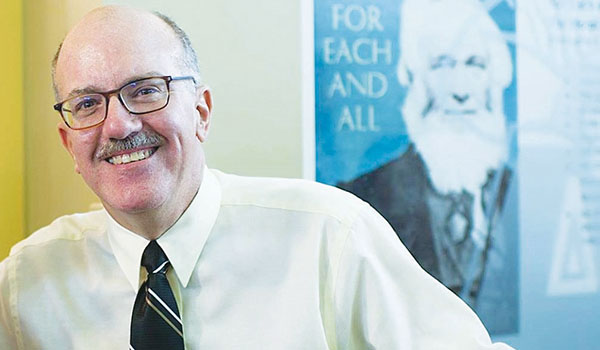 DOWAGIAC — Christopher Momany has been inspired to put pen to paper once again.

“This concept for this book comes from pre-Civil War religious groups,” Momany said. “Many groups were compromised over the concept of slavery. The Methodist movement started out being against slavery before it ended up compromising over it. It’s a story about the sad compromising of our culture, but I will emphasize the people who did the right thing.”

A graduate of Adrian College, Princeton Theological Seminary and Drew University, Momany was the chaplain and a professor at Adrian College for more than 20 years before becoming First United’s pastor in July 2019.

Momany is a Benton Harbor native and has long been interested in history as it relates to equality and how the Methodist denomination handled the subject of race in the Civil War era.

“My earliest years were in an interracial environment,” Momany said. “I had many friends from different racial and ethnic backgrounds. I had an interest in equality and always had an interest in the Methodist movement, so I wanted to see what my denomination was doing to stand up for equality. We’ll see how some leaders stood up for equality and others didn’t. Some leaders started to tolerate slavery. The more popular the Methodist movement became, the more they adopted the cultural standards of the time. They sold out their integrity.

“I will also talk about some of the prophets who steered this in the right direction.”

Momany has been published in numerous scholarly venues and popular publications. His first book, a 2011 release “Doing Good: A Grace-Filled Approach to Holiness,” is about the Wesleyan ethic of love and justice. His second book, titled “For Each and All: The Moral Witness of Asa Mahan,” focuses on topics including the teaching of moral theory in American colleges and how academic cultures either confronted or rationalized slavery.

“You put together a proposal for a publisher and get your research started,” Momany said of the publishing process. “You talk about how you’ll approach the book, what libraries you’ll look into, and that sort of thing. It’s kind of like a pitch. You have to have a good idea, have to be able to put it together clearly, and the publisher has to give the go-ahead.”

Momany’s current book project is under contract by Foundery Books, a publisher based in Nashville, Tennessee. Once his manuscript is submitted, the editing process will begin. Momany hopes to have the book finished and available in bookstores by late 2021 or early 2022.

“It’s cool to have a contract,” Momany said. “There’s a lot more certainty when writing a book with a contract.”

In a society where social justice issues are often at the forefront, Momany believes his project is fitting.

“I’ve been researching this topic for years,” Momany said. “I study ethics, how do you understand right and wrong. I’m interested in Civil War history. I’m a history geek, and I’m a pastor. Talking about right and wrong and how does it play out over history is my thing. This project is timely. We’re wrestling with these same questions today on a bit of a different level.”