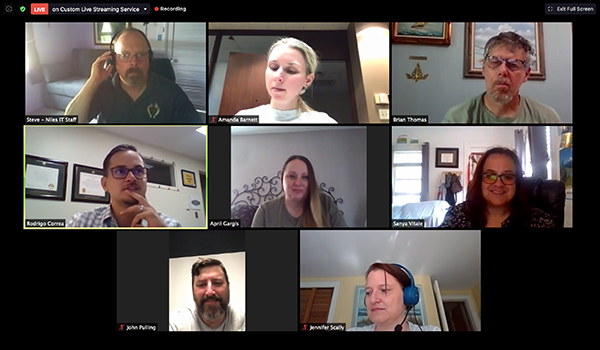 NILES — The Niles planning commission hosted its first meeting since March 18 on Wednesday. The meeting, hosted virtually, featured a discussion about the city’s master plan draft and the zoning ordinance updates from Sanya Vitale, community development director for the city of Niles.

A question had been posed by planning commission member Brian Thomas about the nonconformities with current zoning, especially in relation to the 11th Street overlay.

Vitale sent out an article from the Michigan State University Extension that explored how grandfather clauses and nonconformity exist in zoning laws in Michigan.

“The way this kind of works, zoning goes along with the original building on that tract of land,” Vitale said. “With the way that the Sparkle Lube was specifically built and signed, they had a big, long sign along the northern part of their building. It was allowed to be there before the 11th Street overlay, and really before the 2007 zoning ordinance was enacted. Which then gave way and set the preexisting land-use activity that was grandfathered and allowed for Green Stem in the long term.”

Green Stem, 1140 S. 11th St., is allowed to have the sign because of the grandfathered zoning from the former Sparkle Lube at the address, making it an exception to current ordinances.

Vitale explained that due to the way several ordinances have been laid out, if a building no longer exists on the land, the manner the previous building was zoned in stays with the land to the next private owner. Previous zoning may be broken when government buys the property, or when a private owner seeks to change the zoning, according to Vitale.

With the master plan and zoning ordinances coming up for review with the planning commission, Vitale mentioned this to think about going forward.

“There are many residential parcels that are 50 feet by 100 feet,” Vitale said. “This gives you 5,000 buildable square feet. In the city of Niles, you cannot build on a residential lot unless it is 8,000 square feet. We literally have hundreds of unbuildable parcels right now.”

Following the first discussion concerning the overlay, updates from progress on the city’s master plan and zoning ordinances addressed current concerns coming forward with both tasks. Vitale said the master plan might need more work before bringing it before the public for discussion and input.

“I wasn’t prepared for a pandemic, for sure,” Vitale said. “We didn’t consider public health the way the we should now. I think we need to wait before we take this out into the public because there may be goals we need to reconsider as the fall comes to us.”

Thomas confirmed the next steps for the master plan draft were hosting multiple public meetings for input.
“[COVID-19] makes it tough,” he said.

Vitale acknowledged that hosting meetings on a Zoom and call-in platform worked but came with challenges.

“It makes it incredibly difficult for a community as impoverished as ours is,” Vitale said.

Vitale brought up current zoning ordinance concerns community members had brought to city council and to the city’s attention.

“We need to consider the fact that we are a built-out community,” Vitale said. “We need to start having some of these conversations by neighborhood.”

“It allows us to have an opportunity to have a listening session,” Correa said.

According to Vitale, she has noticed people are feeling unheard.

“People feel like rules are made for them, and not with them,” she said.

Vitale spoke of recent concerns from residents on N. 12th Street in Niles.

Vitale spoke of the challenges she has heard residents of the area voice recently to the city.

Correa agreed the planning commission should start inviting in and having conversations with residents at the neighborhood level, as the commission moves forward looking at zoning ordinances.

“I think it’s an opportunity for us to engage [residents] in transparency and say, ‘you have a say. You can have ownership. We want you to have a seat at the table,’” he said. “I think that’s how you build long lasting communities that are supportive, especially in times like this. If your community has these opportunities it is engrained in its actual culture and DNA.”

NILES — In a room with both civilians and superheroes, each one looks down at papers in front of them.... read more