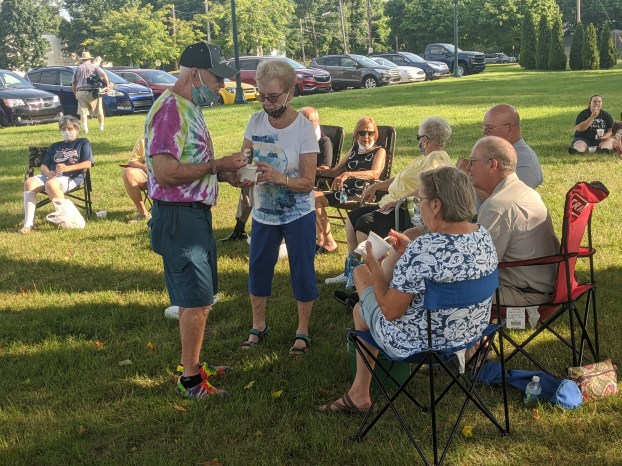 DOWAGIAC — Residents gathered to get the latest scoop from the Cass County Council on Aging’s Ice Cream Social Distancing event Wednesday on the lawn of the James E. Snow Professional Building in downtown Dowagiac.

The free event, which took place from 6 to 7 p.m., offered people of all ages the opportunity to socialize and eat generous portions of ice cream, all the while listening to live music provided by Dowagiac resident John Seculoff. Participants could choose from flavors including berry swirl, pecan praline, chocolate and vanilla, with toppings like strawberry syrup, sprinkles, nuts and whipped cream also available.

It was the COA’s second ice cream social event, with the first taking place outside of its Cassopolis Lowe Center last week Friday.

Extra precautions were taken by the COA to ensure the safety of participants amid the COVID-19 pandemic, including requesting use of the lawn of the James E. Snow building from the city of Dowagiac.

“A few weeks ago, when we were planning this, we were afraid that it might be dangerous,” Heirty said. “But everyone has been behaving, everyone is wearing masks and being careful. We’re working with an older population, so we’re very conscientious about things like that.”

Marty Kleva, a South Bend native who owns a house on Indian Lake in Cass County, enjoyed the time spent with friends.

“It’s a great night for an ice cream social,” Kleva said. “We’re here with friends that we used to go to the COA with and work out with every morning, so we all came together for the ice cream social. It’s nice of [the COA] to do something like this. It’s good to get out and it’s good to see friends, be somewhere and do something. But everyone still needs to be cautious, there’s no question about that.”

For Heirty, one of the biggest concerns heading into the event was attendance. Several dozen people were estimated to have attended the social.

“Will there be nobody there or will there be 500 people people standing too close to each other?” Heirty said. “I’m glad there was a good turnout but I’m also glad we didn’t have to worry about people not being spread out.”

When asked the most important question — which ice cream flavor was the most popular — it didn’t take long for Heirty to respond.

“By far the pecan praline,” Heirty said. “We did this in Cass last week and it was the same thing. “We ran out of praline there and it looks like we’re going to run out here, too.”

“The pecan was great,” he added. “Although, any one of those flavors would’ve been great choices.”

With the success of the ice cream socials in both Cassopolis and Dowagiac, Heirty hopes to plan similar events in the future.

“We’re not just seeing the senior population at these events, we’re seeing families, grandkids and younger families,” Heirty said. “It’s a nice event and I’d love to do more like this.”

Kleva looks forward to future events hosted by the COA.

“It’s a good organization,” He said. “They do a lot of good things for the community and people respect that. They’re going to attend events when they have them.”

LANSING — As communities across Michigan face budget uncertainties due to unanticipated costs associated with the COVID-19 pandemic, the Michigan... read more