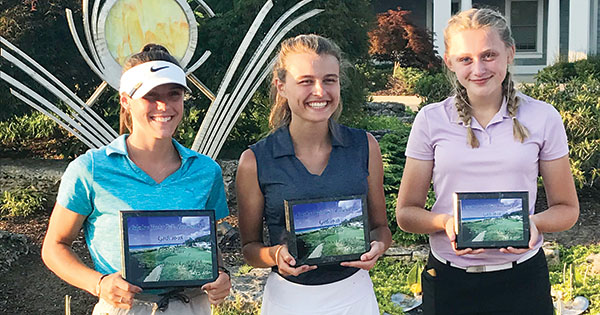 Dowagiac’s Greta Whitaker (left) will take a 10-shot lead into the final round of the Lakeshore Junior Golf Association Tour championship on Monday. (Submitted photo)

Whitaker to play for tour championship

Whitaker shot 84 to tie Gracie Thomas of St. Joseph for second-place in the opening round of the tour championship at Lake Michigan Hills on Monday.

Whitaker will take a 10-shot lead into the final round. Thomas is currently in second place, while Franklin and St. Joseph’s Maya Hunter are tied for third, 11 strokes back.

“I probably could have done a little better,” Whitaker said about her play on Monday. “I played to the best of my ability.”

Whitaker had played at Lake Michigan Hills before, but the tour used different tees, which presented a bit of a challenge.

“We played from the red tees, so they are quite a bit shorter than the ones I am used to playing,” she said. “It made it harder to choose which club to use.”

Whitaker is familiar with Hawks Head, but said she had not played there in two years.

“I am going to have to do my best,” she said. “I obviously want to stay in the lead. I just have to get there and get ready. Having a 10-stroke lead makes it a little bit more comfortable. It is a big cushion, but I would have liked to have had a bigger one.”

Whitaker, who has to report to Bethel University in a couple of weeks to begin preparing for her collegiate season, said playing on the tour had been fun.

“It has been fun meeting new people that I never get to play against,” she said. “Playing on the tour has been good because I have not been able to practice with my teammates [at Bethel].”

Marley Walters, of St. Joseph, will take a 13-shot lead over Becca Guernsey on Monday in the Girls Division 13-15 Division.

Alan Wegner, of Cassopolis, will also play for a tour championship on Monday in the Junior Division.

Wegner, who finished third on Monday, has a six-shot lead over runner-up William Hundt, of Stevensville. Niles’ Dean Wagner is currently seventh.

In the Collegiate Division, Dowagiac’s Jeremiah Guernsey finished third on Monday after shooting an 87. Guernsey is in second place overall, 12 strokes behind leader Nick Brausch, of Paw Paw.

Jacob Marohn, of Stevensville, leads the Boys 13-15 Division by 33 shots. Dowagiac’s Abraham Guernsey is currently in fifth place. St. Joseph’s Ryan Guzzo has a 26-shot lead over Landen Thompson, of Baroda, in the Boys 16-18 Division.