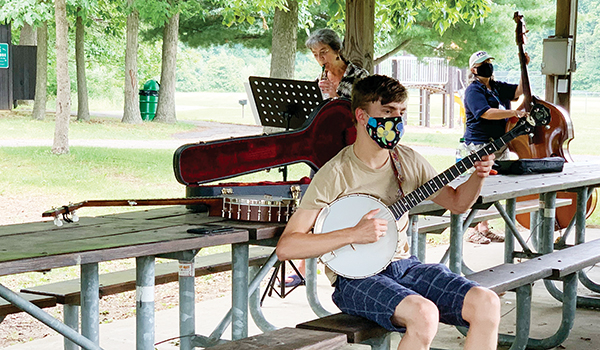 CASSOPOLIS — Strings were strumming and flutes were whistling Wednesday afternoon at the Old-Time Jam at Dr. TK Lawless Park.

The jam session, organized by retired music teacher Bev Smith, is hosted from 4 p.m. to 5:30 p.m. every Wednesday at the park. While the park’s entry fee is $1 for county residents and $3 for non-county residents, the event itself is free.

Both musicians and listeners alike are encouraged to attend, Smith said.

“My hope is eventually we can get 10 to 20 people involved, socially distanced, of course,” she said.

“It’s an overlooked genre,” Smith said. “Country, Western and Bluegrass music developed from old-time music. Old-time is what people used to play before recording and radio. It was community-based. People would get together and play tunes that they knew.”

Wednesday’s session was the fourth meet-up, according to Smith. So far, the sessions have had seven regulars, playing instruments such as the fiddle, guitar, bass, banjo and tin whistle.

For Cassopolis native and banjo player Eric Bosler, the Old Time Jam has been a breath of fresh air amid the COVID-19 pandemic.

“In recent times, a lot of jams have broken up,” Bosler said. “But now we’ve got something good going outside, which has been a great getaway for me and everyone else here.”

“My mom listens to a ton of old-time music,” Bosler said. “Growing up, we’d go to fiddle festivals and other festivals. It was always a joke in the family that I’d play the banjo one day. I picked it up one day and the joke became a reality.”

While many of the regulars are experienced musicians, Smith encouraged both musicians of all skill levels as well as listeners to give the event a try.

“I want people to come and not think that it’s gonna be a professional concert,” Smith said. “If there’s a guitar sitting in your closet and you know three chords, that’s probably enough. If there’s a beginner or someone who plays other genres, they should just come and see what happens. Bring a chair. There’s plenty of room to sit.”

“From a player’s perspective, if you have any familiarity with old-time or folk, jamming with people is what folk is what it’s all about,” Bosler added. “As a listener, times are tough. There’s not a whole lot we can do, so this would be a great time to get out and listen.”

EDWARDSBURG — As families and individuals try to cope with the everyday stresses associated with COVID-19, Southwest Stephen Ministry is... read more