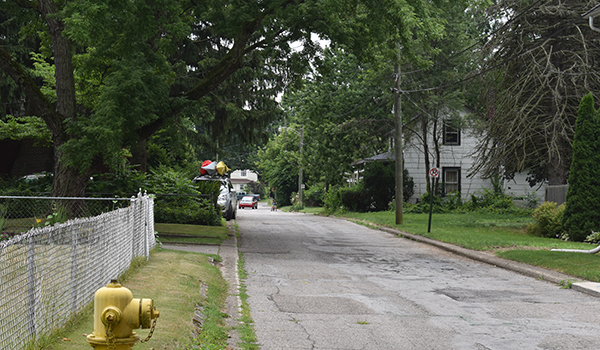 N. 11th Street in Niles is a narrow road with no street parking posted. Without street parking, options for parking are frustrating to residents like Libby Nimtz. (Leader photo/CHRISTINA CLARK)

NILES — At least since mid-June, Niles resident Libby Nimtz had become increasingly frustrated with code enforcement on her street in the Dickereel neighborhood of Niles. The street where Nimtz and her family reside, N. 11th Street, has become what she feels is a target for enforcement.

In a letter to Mayor Nick Shelton, city council members and Niles Fire Chief Larry Lamb, Nimtz stated over the last six years the Nimtz family have received multiple notifications from code enforcement, mainly for parking their vehicles in their yard.

“My 6 and 4-year old are avid bike riders, and to keep them safe and off of our narrow road, we park our cars in our yard so they can ride their bikes, scooters, et cetera in our driveway,” Nimtz said in the letter.

The letter states that Nimtz had spoken with the code enforcement officer in her area and Lamb.

“Despite these conversations, code enforcement has been relentless and has not stopped with the citations,” Nimtz said.

Article 6-4 of City of Niles Zoning ordinance states that for a residence, parking may be located on one side or directly in front of an attached or detached garage, “provided that no portion of the required front yard outside of these areas is used for parking.”

There are options given for putting gravel or pavement down to provide an expanded driveway to park in.

“The city’s rules have made it harder for us to have an ‘approved’ parking surface,” Nimtz said in her letter. “According to city rules, any additional driveway must be paved and cannot be gravel, like the majority of our neighborhood has, thanks to a grandfather clause.”

The cost between the gravel and pavement is a limiting factor for the Nimtzs.

She said over the last four to five years, other families in her neighborhood have felt they were also targeted by code enforcement as well, specifically for violations such as parking cars on their own lawn property.

At the Monday evening meeting of the whole, Nimtz called in to voice her concerns during citizen participation.

“It’s clear that we are not the only family who has felt this way,” Nimtz said. “It’s not my wish to hash out past events, but really to focus on change and how we can better change what’s been going on and maybe bring about some changes in the community as a whole. Regarding the parking situation, specifically, I hope that you’ve taken the time to notice how many people in Niles, not just in our neighborhood, park their vehicles in their yard temporarily.”

Nimtz said the street she resides on it only 16.5 feet wide, making it the size of an alleyway.

“It seems like the best way to combat decline and neglect in property would be to focus on specific criteria of a condemned home and focusing most of the attention on those properties, rather than viewing everyone as criminals who violates code,” Nimtz said.

She expressed a desire for the city to check into interactions between residents and code enforcement officers.

“As a family looking for some positivity here, amidst the doom and gloom, it’s my goal to see some positive change be brought about,” she said.

The council members attending discussed their thoughts on code enforcement after Nimtz’s comments for over 35 minutes.

Council member John DiCostanzo said that while he understood Nimtz’s concerns, the conditions and zoning ordinances existed when she purchased her home.

“Living in a city like we do, I think there needs to be standards that need to be upheld by property owners,” he said.
He ultimately said he would be willing to discuss further solutions. He is a member of the Planning Commission board that will review zoning ordinances in the future.

Walking through Nimtz’s neighborhood, council member Dan VandenHeede said he could see the concerns she had cited. However, VandenHeede did say it was “unbelievable” how many cars were parked on lawns in the neighborhood. He referenced the inequities that might exist in code enforcement between private and commercial property.

Potentially shifting some ordinances based on space availability was pitched by council member Gretchen Bertschy.

“It pretty much comes down to measurement from the center of the road,” Bertschy said. “I don’t think there are too many places in our city where the road is so narrow.”

Council member Georgia Boggs mirrored concerns for allowing residents with special circumstances to be allowed to have some leeway within the ordinances.

Zoning and code is addressed by the Planning Commission, and the city council can “trigger” pushing that up on their agendas. Currently, the Planning Commission has not met since March due to COVID-19 concerns and needing to have public input on the city’s Master Plan draft, which will be looked at in its next meeting on July 22. After the Master Plan has been approved, zoning is on the commissions list to discuss a potential assessment of codes, with many written three decades ago.

At the end of the meeting, Mayor Nick Shelton recounted his first encounters with code enforcement when he moved into the city of Niles. He was given notices for brush, and learned to adapt to the new-to-him ordinances. He did concede the ordinances may be due to be reviewed.

After the meeting, Nimtz said that she was not looking for a pass or an exception, “just a common-sense solution to enforcing code.”

She was disappointed that the council did not address certain issues.

“No one spoke to the decision to issue parking violations to citizens during a pandemic,” Nimtz said. “No one could explain how parking working vehicles on my personal property is a legal nuisance that deserves a fine if escalated. No one spoke about the issue of enforcing the parking code during certain hours, how that’s unfair to certain families. The issue of ticketing citizens for city compliant brush piles during brush pick up weeks was also not addressed.”

Fire Chief and code enforcement officer Lamb said during the meeting code enforcement uses a centralized database, so the officers can track the issues and interactions. This is to be able to see who has been interacted with, and how many times, and can be used to pick up on potential implicit biases in treatment. The officers also wear body cameras, and he said they have been a great help to see how code enforcement interacts with residents.

Nimtz said she felt enforcement of codes were up to the bias and discretion of the officer.

“At the end of the day I can say I tried,” she said. “It appears our options are to attend city planning meetings and hope our voice is heard and that change can be made, or sell our house and move out of city limits to avoid the harassment by code enforcement, that seems justifiable by some.”