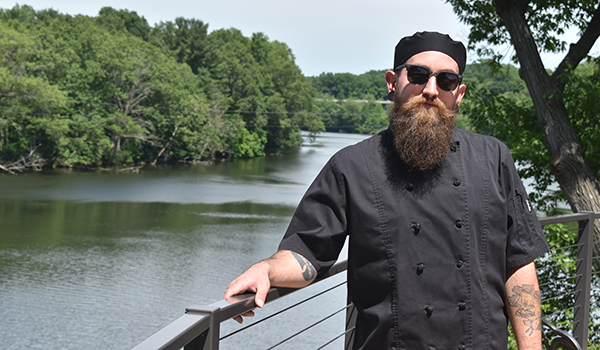 BUCHANAN —  On a clear Tuesday afternoon, Chef Ian Woodiel looked out over the golf green and the river. The sun shined on the patio and peeks in the dining room windows, glinting off the river. The sounds of children playing in a pool nearby seal the summery feel, as players tee off on the golf course. Woodiel smiled before he dived into catering planning for a four-day golf invitational.

As the papers were signed to take over the restaurant at Orchard Hills Country Club, Woodiel became the head of his second restaurant business during the COVID-19 pandemic, before he turned 30. He brings his experiences from fine dining, catering and casual fair to the club’s menu program.

South of the state line in Roseland, Indiana, Woodiel’s name graces the restaurant attached to Cheers Pub. He opened his first business in February, a month before COVID-19 arrived in the region. With the business in Roseland picking back up and returning to dine-in along with carry out, he thought back on the rocky start.

“Pizza has kind of saved my life in this weird time,” Woodiel said. “We are transitioning back to normal, and it’s better, but obviously we aren’t there yet.”

At Woodiel’s, in addition to pizza, the menu includes house-made soft pretzels, sweet potato poutine, a variety of burgers and hot dogs, along with steak and mussels.

At Orchard Hills Country Club, Woodiel will explore both the casual, lighter fare items and fine dining skills he has acquired in his 14 years in the kitchen.

“I’ve been cooking off and on, pretty much on, since August 2006,” Woodiel said. “I started washing dishes at a local restaurant, and I worked my way up from there. I’ve always loved doing it for a living.”

Learning as he went, Woodiel is mostly self-taught. Working his way up through area kitchens, he was creative in offerings. Reaching a well-known, area fine dining establishment’s kitchen helped to refine his work.

“I had the opportunity to work under a lot of talented chefs at LaSalle Grill [South Bend], who taught me a lot more technique and the finer side of things,” Woodiel said.

The daytime menu at the Orchard Hills will have lighter, lunchtime favorites offerings, including sandwiches, burgers and a menu for children.

Woodiel said the restaurant at Orchard Hills will have three rotating entrees each week and a dinner service on Friday where patrons can enjoy a plated meal while listening to music on the club house’s patio.

“We’ll do occasional themed dinners, and possibly some cocktail and wine pairings,” Woodiel said. “I’ll use this as an opportunity to do some higher-end dishes.”

Duck confit, glazed pork chops, a confit Cuban, crab cakes and steamed mussels are just a few things that Woodiel is excited to offer to patrons of the clubhouse restaurant.

“I have that experience from doing fine dining for a while that I can work it in, without being stuffy,” Woodiel said.

“I can’t do anything buffet style,” Woodiel said. “So, events are a little bit more traditionally plated just because it’s what I have to do. There’s an upcoming appetizer party, which traditionally would have passed hors oeuvres, but we can’t do it that way now. It’s a challenge.”

Overall, it is the people and the beautiful setting that drew Woodiel to the Buchanan area country club.

“As I’ve been out here, everyone wants to introduce me to someone. Everyone has been really open and friendly,” Woodiel said. “It’s obviously gorgeous. I like the opportunity to use more of my skillset to do some finer dining and catering. The people and the location did it. I’ve always been attracted to being next to a river.”

CASSOPOLIS — The Lewis Cass Intermediate School District is reconsidering its namesake. At a board meeting Wednesday, the Lewis Cass... read more