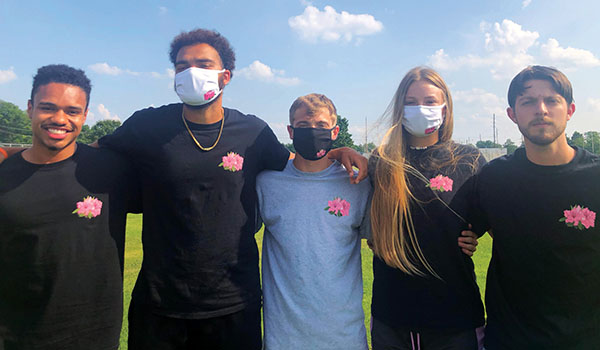 Kayla Heffington is designing and selling merchandise with an azalea logo in honor of her late daughter, Azalea Cole. Fifty percent of proceeds go directly to the Children’s Heart Foundation, while the other 50 percent covers the cost of materials. (Submitted photo)

DOWAGIAC — When Dowagiac resident Kayla Heffington decided to name her daughter Azalea, she did not know that azalea was a flower.

When she previously lived in Florida, she went for a walk when she came across a street called Azalea. Looking back at the moment, Heffington said the name stuck with her in a way that she cannot fully explain.

“I just really liked the name, so I typed into my phone, and the flower emoji popped out,” she said, the memory bringing with it a slight laugh. “I thought, ‘this is perfect.’”

Tragically, the daughter Heffington named after the Florida street and pink flowers died earlier this year as the result of a heart defect, and azaleas will forever be a reminder of the child she lost.

Despite her grief, the young mother is now using the image of pink azaleas to both keep her daughter’s memory alive and help prevent other mothers from having to go through what she did.

Heffington, 21, is designing and selling T-shirts, masks, baby clothing and other items with an azalea logo both to honor her daughter’s memory and raise money for the Children’s Heart Foundation, which works to save, extend and improve the lives of congenital heart defect patients by funding research. Fifty percent of proceeds from Heffington’s items go directly to the Children’s Heart Foundation, while the other 50 percent covers the cost of materials.

Azalea Elizabeth Cole was born Feb. 4 in Niles. Initially, Cole was believed to have been born healthy, aside from a heart murmur doctors told Heffington would go away with time. However, weeks later, the heart murmur remained, and Cole began to experience breathing issues. Further testing revealed that the newborn suffered from coarctation of the aorta, the narrowing of the large blood vessel that leads from the heart. The condition is usually present at birth.

Cole died as a result of her heart defect on Feb. 22.

Heffington said losing Cole was the worst thing she could imagine going through, but she was inspired by the strength her daughter showed during her brief lifetime.

“She was fighting for her life,” Heffington said. “She showed me a lot of strength, which makes me not want to give up. She showed me that if a 2-week-old baby can fight that hard, I can fight, too.”

Heffington began making items with the azalea logo in June as a way to cope with her grief. With the support of family and friends, she went out, bought a printer and an iron, and began making all the items from her home. As of Tuesday, the items had raised nearly $2,000.

“I knew right away I wanted to do something because many people did fall in love with [Cole], and not many people got to meet her,” Heffington said. “I want to make sure her name isn’t forgotten and to help other children and patients with heart defects.”

Heffington said she had been touched by the amount of support she has received and hopes to expand her project to offer items. She said she plans to continue selling azalea items as long as she is able.

“I’m very, very grateful people have been so loving and supporting of her. Seeing people buy items with her name and face really makes it a lot easier to deal with,” she said. “[Coarctation of the aorta] is one of the most common birth defects in babies born, and I would really like to prevent this from happening to someone else, and I would really like to get Azalea’s name out there.”

To learn more or to purchase one of Heffington’s items, visit azaleaelizabeth.org.