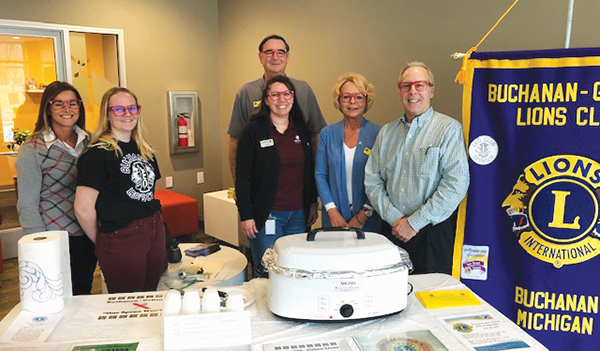 BUCHANAN — Enjoying the St. Joseph River and some friendly competition for a good cause this Saturday is what the members of the Buchanan-Galien Lions Club are hoping many will show up for.

The club is hosting its third annual outdoor kayak-canoe Poker Run to fundraise for the club’s charitable efforts. The event, which organizers said is socially distant by nature, will be hosted at 9:30 a.m. to 1 p.m. Saturday. The poker run will begin at the City of Buchanan Boat Launch, located at 15437 N. Redbud Trail and will end at Camp Betz, in Berrien Springs. The event will cost to participate is $25 per person, while children 12 and under are free.

Board member Jerry Flenar hopes to get boats in the water by 10 a.m.

“A lot of local people are not familiar with the St. Joseph River now,” Flenar said. “I think the people that come, it will be their first time ever being on the river. It’s a beautiful part of Michigan.”

Participants in the event will have eight stops to make in their watercraft from beginning to end. At each stop, participants will draw a playing card. Once a participant reaches Camp Betz, they will submit their best Poker hand of five cards to organizers for potential prizes.

“We have gift certificates, bottles of wine, it just depends,” Flenar said.

Participants will need to bring their own life jackets and kayak or canoe to join the fun, as the club does not rent out the equipment.

Flenar said the event will have local fire departments in the water, as well as the Berrien County Sheriff’s Department.

“We’ve got it covered pretty well from the river safety standpoint,” Flenar said.

The donations to participate will be going to support the Buchanan-Galien Lions Club.

“We donate an awful lot of different Buchanan events,” Flenar said. “It’s mainly getting out and have fun. The money will be used amongst all of our different programs.”

According to the club’s Facebook page, it has been serving its community for more than 75 years.

Lion’s Club International is the world’s largest service club organization, according to the page. The club’s motto of “We Serve” is observed through service projects in the community, as well as working with the club’s SightFirst Program and Lions Worldwide Sight Day.

More information on pre-registering for the event and purchasing tickets can be found on the club’s Facebook page.