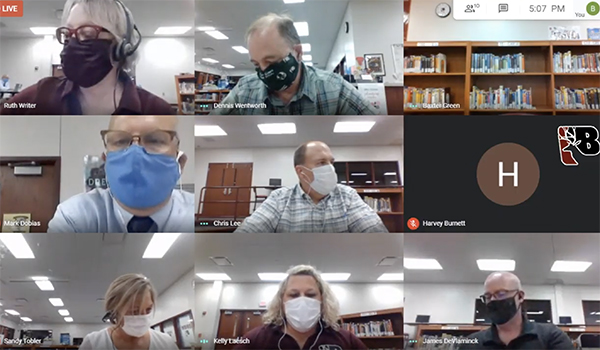 A fourth interview had been scheduled for Monday evening with Christopher Machiniak, regional director of career and technical education at Berrien RESA. However, Machiniak removed himself from consideration before interviews began.

The candidates were interviewing for the position currently held by Timothy Donahue, who signed a separation agreement with the board of education in May. Donahue will remain in his position until the end of August.

Donahue’s tenure as superintendent was mired with controversy, as teachers, staff and community members routinely expressed concerns with his leadership in public meetings. Concerns included an alleged lack of support, communication and collaboration from the administration.

The board seemed to have some of these concerns in mind when interviewing Monday’s candidates. Several of the questions the board asked candidates revolved around leadership style, communication and how they would build a positive culture in the district and raise student achievement.

First interviewed was Brian Brown, the business manager of the River Valley school district in Three Oaks. His experience includes 14 years teaching at Buchanan and work in the financial field at United Federal Credit Union and Shoreline Bank.

In his interview, Brown was asked by the board what experience he had creating a culture of mutual support and appreciation and making school a place students want to learn and staff want to work.

In his response, Brown said in his previous positions that being transparent has allowed staff to accept hard decisions while also allowing them to celebrate the good things.

“It’s important to give the ‘why’ and explain the ‘why.’” he said. “Because we do that, we have been able to maintain a great positive culture at River Valley, and I would assume it would be a similar experience at Buchanan.”

“I don’t necessarily believe that leadership is one box, and that’s what everybody is,” he said. “I think, at any given moment, you are actually going to go from one leadership style to another depending on who your audience is and what you are presenting and what you are dealing with at the time.”

The second candidate interviewed was Brandon Waggoner, the current assistant superintendent in Berrien Springs. Previously, he worked as that district’s executive director of technology and virtual academy director at Berrien Springs and has taught at River Valley.

Like other candidates, he was asked by the board what experience he had creating a culture of mutual support and appreciation and making school a place students want to learn and staff want to work. He said trust is necessary to building positive school culture. He said trust could be achieved through honesty and a willingness to listen to staff and students.

“People want to be part of a team, a winning team. It’s just a part of human nature,” Waggoner said. “They want to build something. It’s just the way we humans are.”

“I like to collaborate a lot,” he said. “I think there is a lot of power in bringing groups of people together and having conversation because there are a lot of ideas that come to the table that I wouldn’t have thought about.”

The final interview of the evening was with Dorothy Blackwell, the superintendent of the Vassar Public Schools. Before that, she was an academic consultant for the Ingham Intermediate School District and interim superintendent of the Waverly school district. She was also the curriculum director and a principal in Waverly.

She was also asked what experience she had creating a culture of mutual support and appreciation and making school a place students want to learn and staff want to work. Blackwell said she is extroverted and, as a superintendent, considers herself a “master teacher” that can jump into the classroom and teach and interact with students and staff.

“You have to walk the walk, and I know that is cliché. People must see you. You must be accessible,” she said. “To have a culture of mutual support, you have to have trust. Say what you are going to do, and then do it, and if you make a mistake or something didn’t work out, you have to be able to stand up and say, ‘hey, that didn’t work. We have to do something else.’”

When asked about her leadership style, Blackwell said she had a proactive and visible style.

“My leadership style, I would say, I’m a servant leader at my heart,” she said. “But in the superintendent position is situational. There are times when I have to make the hard decision.”

For a link to the live stream, visit buchananschools.com.