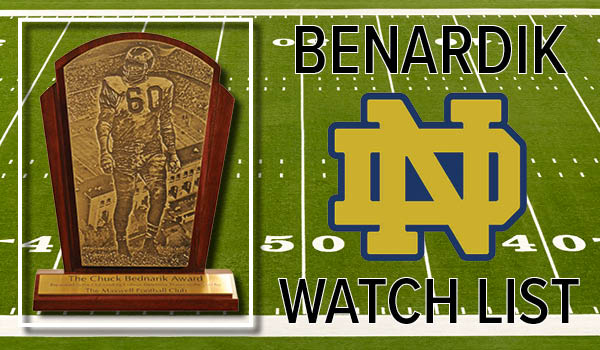 The Bednarik Award is presented annually to the outstanding defensive player in college football.

Tying for a team-high 80 tackles in 2019, Owusu-Koramoah started all 13 games this past season, contributing a team-high 13.5 tackles for loss with 5.5 sacks, four pass breakups, three QB hurries, two forced fumbles and two fumble recoveries. Three sacks came during the 2019 Camping World Bowl victory over Iowa State, earning him a spot on the ESPN All-Bowl Team, and he reached the nine-tackle mark three times during the season: at Louisville, at Stanford, and against Iowa State.

In his true-freshman season, Hamilton was named to The Athletic Freshman All-American team and received the team award for co-defensive Newcomer of the Year. He played in all 13 games in 2019, snagging four interceptions, a feat achieved by only 50 players nationally and only four freshmen in the FBS. On his first defensive snap in Notre Dame Stadium, Hamilton intercepted a New Mexico pass and returned it 34 yards for a touchdown.

The Bednarik Award has been presented to the college defensive player of the year since 1995 and is named in honor of Chuck Bednarik, a former standout at the University of Pennsylvania and with the Philadelphia Eagles. Bednarik is a member of both the College Football Hall of Fame’s Class of 1969 and the NFL Hall of Fame’s Class of 1967. The current watch list includes 90 defensive players.

The formal presentations of these awards will be made at the Maxwell Football Club Awards Gala, hosted by Tropicana Hotel and Casino Atlantic City on March 12, 2021.