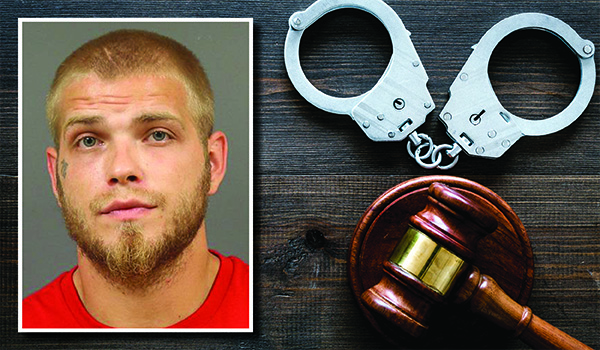 NILES – A Niles man who punched a Niles police officer in the face was sentenced Monday to probation and tether in Berrien County Trial Court.

Chaz Nathan McGowen, 27, of Baldwin Drive in Niles, pleaded guilty to resisting and obstructing police causing injury and was sentenced to two years’ probation, 180 days on tether and $672.37 in fines, costs and restitution. Further restitution for the injuries suffered by the officer could be assessed in the future.

He must be evaluated for substance abuse and mental health concerns and complete any treatment ordered. Other charges of possession of a firearm by a felon and disturbing the peace were dismissed.

The incident occurred Feb. 22 in the city. McGowen was on drugs at the time of the incident and believed that people were after him. Police were called after he knocked on the doors of a number of homes. He confronted police and punched an officer in the face.

“This was a fight, this was a classic resisting and obstructing case,” the judge added.

Another Niles man was sentenced to another week in jail and also faces a parole violation hearing after being convicted of fleeing police.

Demetrious Dontae Barnett, 22, of Platt Street, pleaded guilty to fourth degree fleeing and eluding police and resisting and obstructing police and was sentenced to seven days in jail. He has been in jail for 194 days but receives no credit since he is on parole. He can serve the jail time in any penal institution.

The incident occurred Jan. 2 in the city of Niles.

Barnett was paroled in October 2019 from a 2015 conviction for assault with intent to do great bodily harm less than murder.

“He is on parole, we should leave it up to the parole board to decide if he needs to serve more time,” he said.

Barnett apologized for his actions.

“I just want to apologize for my actions, I do regret what I did,” he said. “I know what I did led to almost hurting someone.”

Chad Ray Simmons, 37, of East Clear Lake Road in Buchanan, pleaded guilty to intentionally disseminating sexually explicit material and using a computer to commit a crime and was sentenced to 12 months’ probation and $945 in fines and costs. He cannot have any contact with the victim or connect to any social media site.

Simmons apologized for his actions. He lost his job after the incident.

“This was a monumental lapse of judgment,” Judge Schrock said. “Since the pandemic isn’t getting any better, you are getting probation and not jail. You don’t want to come back and see me, I may not feel the same way in the future.”