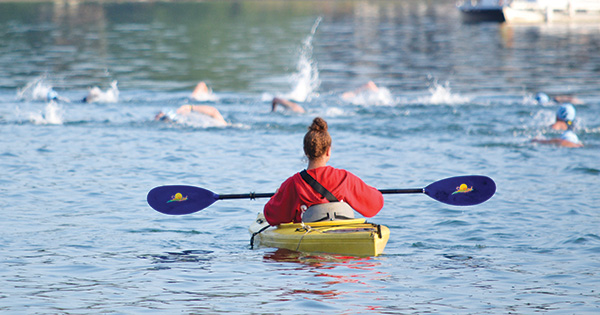 The Eagle Lake Triathlon and the Run Eddie Run 5K are the latest events to be canceled due to the COVID-19 pandemic. (Leader file photo)

The Edwardsburg Schools Foundation Run Eddie Run announced it was canceling the event until 2021. Those who have already signed up to participate are being given the option of getting a refund or having the foundation keep their registration fee as a donation.

According to Eagle Lake Triathlon Race Director Alex Antoniu, this year’s event has also been canceled.

“Unfortunately, we have to cancel the Eagle Lake Triathlon for this year due to COVID-19,” he said. “We plan to be back for 2021. We considered many factors before making this decision. As most of you know, race planning begins many months before the day of the event. With vendors shutting down and gathering restrictions still be reviewed, we cannot in good conscience make the promise of a safe, quality event.”

Refunds have begun being issued. Participants are also being given a choice to defer their registration to 2021, a race later in the year, or donate their entry fee.

The Run Eddie Run 5K was scheduled for July 18, while the Eagle Lake Triathlon was set for Aug. 1.

Currently, the Barron Lake Triathlon is still on. The event is scheduled for Aug. 22.

In order to comply with social distancing guidelines, several changes have been made to the triathlon for this year only.

Those changes include only one spring distance race, which will include a 300-meter swim, an 11-mile bike ride and a 5K run. There will be no children’s race this year.

The race benefits Racing for Steve-O Foundation. The mission of the foundation is to help Michiana children have opportunities to be involved in sports and athletics regardless of physical, mental and financial barriers.

The foundation is named after Steve Smith, better known as “Steve-O.” Smith was a Michiana resident, swim coach, teacher and World Champion triathlete. On April 24, 2012, he was diagnosed with a deadly brain tumor called Glioblastoma. He battled the disease for 28 months before succumbing on Sept. 4, 2014.

More information is available at barronlaketri.com.