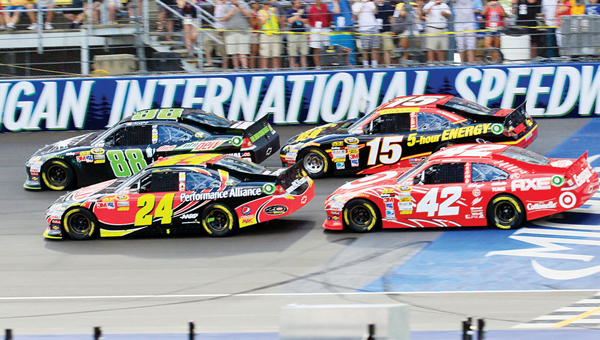 BROOKLYN — There will be racing at Michigan International Speedways this August. There just will not be any fans in the stands.

NASCAR released the bulk of its remaining schedule on Wednesday, which included two Cup Series races, a truck race and an ARCA race the weekend of Aug. 7.

“The return of NASCAR racing at Michigan International Speedway is an important step in the reemergence of professional sports to our state,” said MIS President Rick Brenner in a news release. “We appreciate the patience and support from all of our fans, and we look forward to seeing them back in 2021.”

The NASCAR Gander RV & Outdoors Truck Series race will kick off the weekend at 6 p.m. Aug, 7. The race will be carried on FS1. The NASCAR Cup Series FireKeepers Casino 400 will be hosted starting at 4 p.m. Saturday, Aug. 8 on NBCSN.

There will be two races to wrap up the weekend on Sunday, Aug. 9.

The ARCA Menards Series VizCom 200 will start at 1 p.m. and will be broadcast on MAVTV. The second race of the doubleheader will be the Cup Series Consumers Energy 400, which will begin at 4:30 p.m. and carries on NBCSN.

The Cup Series doubleheader is a first at MIS. Both races have been shortened to 312 miles or 156 laps. The normal distance is 400 or 200 laps.

Ticket holders for any 2020 MIS race will automatically get a credit in the next seven to 10 days, plus an additional 20 percent of the total amount paid for their account. The credit can be used on any race at a NASCAR-owned track in 2020 or 2021. Cash refunds must go through mispeedway.com/assistance. A form must be filled out prior to Aug. 7.

NILES — The historical grounds and unique settings within Fernwood Botanical Gardens are a popular wedding destination for couples through... read more