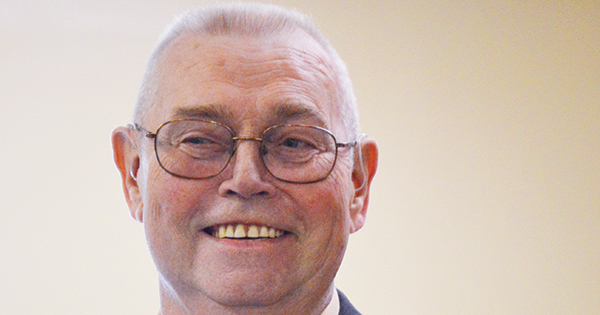 Syson gave back to Niles in many ways

NILES — Some are born to serve others. In the case of Don Syson, he was born to help the children of Niles.

Syson, 74, died June 27 at Memorial Hospital in South Bend, Indiana. He left behind his wife Sharon, who he married in 1968, along with a daughter, a son, his mother, a sister, numerous grandchildren, who he loved to spoil, and others.

He also left behind a legacy of helping the children of Niles through his efforts as a baseball umpire, which date back to the hey days of Babe Ruth Baseball at Thomas Stadium, and the numerous Vikings his life touched with more than 20 years of service to the Niles Community Schools athletic program.

A proud alum, Syson worked the gates, taking tickets alongside Sharon, greeting everyone with a smile as they entered the gymnasium or the football field.

“He was so friendly and had such a calming personality and [had a] fantastic smile,” Upton said. “Don Syson was simply a fantastic man who loved life, relationships and had a real affection for our Vikings. We will all miss him, and now we will all support his living wife through these times.”

Syson would also give Upton some much-needed support during baseball season.

“His wife is a diehard Yankee fan, so the last few years the Astros and Yankees would match up, Sharon would come in her Yankee jacket to get me,” he said. “Don would keep me up to date on the baseball game and bring me cookies to let me know he was for the Astros.”

Upton also admired Syson’s love of the area and his dedication.

“Extremely knowledgeable about the history of Niles and knew everyone in town,” he said. “There was no weather bad enough for Don to ever call in. We played and he was there. And many times, maybe we shouldn’t have played, but that didn’t matter. He’d tell me, ‘this is why I have this jacket. For days like this.’”

Syson did not only turn on the charm at sporting events. He and his wife, Sharon, were the same people away from the game. He had a long love of sports and loved watching local athletes compete.

Megan Kohler, who works as a waitress at Lakeside Bar & Grill, got to see both sides of Syson, as she was a standout athlete at Niles and a coach with the volleyball program.

“Don and Sharon came in nearly every day for dinner,” she said. “Don always had a smile on his face and a tray full of cookies ‘for his girls,’ which was all of us younger waitresses at the restaurant. I also coach volleyball at Niles High School. It was always a great day when I got to see [Don and Sharon] at the front door giving out tickets.”

Don and Sharon also showed real interest in the lives of the athletes they came to know and care about.

“The two of them always asked questions about my life, making sure everything was going OK, making sure my team was doing well,” Kohler said. “They always made sure I had enough cookies to last me until the next time I’d see them. Don was involved in many different aspects of our community. He will be in our hearts for forever. I will always miss his smile and cookies I took for granted each day.”

Syson’s love of sports was not just confined to the high school level.

During his days as an umpire at Thomas Stadium, he worked for more than 25 years, including three Babe Ruth Ohio Valley Regionals and two Base Ruth World Series, which Niles hosted.

Even when his umpiring days were through, Syson remained connected to youth sports by joining the Howard Township Parks Board.

“Don was the prime example of a giving man,” the board wrote in a statement. “He served his community in so many ways, but what he loved most was helping our youth. He was devoted to improving athletics at every age group, which is what made him a critical part of the Howard Township Park Board. When he joined, his first request was to oversee Pepper Martin Park so he could assist with anything the Howard Township Baseball League needed. He brought many wonderful ideas and improvements to our parks during his time with us. We will miss his consistent smile, his quick wit, his love for all things sports and his amazing cookies he brought to many of our meetings.”

Syson was laid to rest last Friday. Later that afternoon, the community gathered for a parade through Niles and past Syson’s home, instead of a dinner to respect social distancing.

Memorial contributions in his memory may be sent to The Wounded Warriors Foundation.