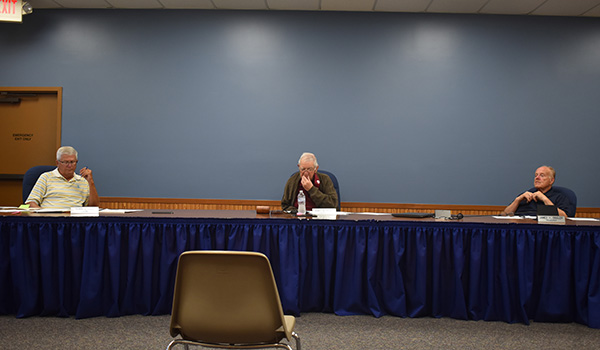 NILES CHARTER TOWNSHIP — With the office reopened to the public, the Niles Charter Township halls are divided up and have stickers down on the floor to provide guidance for social distancing. In the boardroom Monday evening, board members still spaced themselves 6 feet apart at three separate tables.

The board meeting room hosted eight people, with no members of the public present, to discuss a long list of new business and reports to be discussed more in depth as events approach. The department of public works’ new manager, BJ Stepien, attended the meeting, proposing new equipment purchases.

Gravel road chloridation and a new millage to put on election ballots in November were topics of debate between trustees.

Township treasurer Jim Ringler posed a vote for adding a new millage to the November ballot. The new millage would replace the former millage to fund the Niles Charter Township Fire Department.

“I talked to the township attorney about the [millage] currently in place,” Ringler said. “We have a special assessment district for fire. That millage was passed back in the 1960s. The millage that was passed back then by the voters was for up to 2.5 mills for fire operation and up to 3 mills for fire capital improvement, which is the purchase of equipment and maintenance of stations.”

Ringler discussed the difficulties the current millage poses for the department.

“Most millages that are passed are always for real and personal property that we are protecting,” he said. “So, when you do it by special assessment district, you’re not getting paid to protect any personal property. We can’t differentiate that when we go to a fire.”

He explained it as being similar to how an insurance company would pay one amount to replace or repair a damaged home, as real property, and as the property inside that may have been damaged or destroyed as personal property.

“With that said, what we would like to do is propose a millage up to 4 mills, and the current is 5.5 mills. So now, it would be covering both real and personal property. That’s how we can lower it down to a mill and a half,” Ringler said.

Board Supervisor Jim Stover took issue with the terms “new millage” written into the proposal to appear on November’s ballot.

Currently, according to Ringler, the Niles Charter Township Fire Department is operating with a deficit of around $125,000.

“In the history of Niles Charter Township, we’ve never proposed more than what it takes to run the fire department,” Ringler said.

The language for the millage for the ballot proposed was written by the township’s attorney. The board passed the motion to approve the language, where it will be sent next to the Berrien County office for approval.

In other news, gravel roads and treatment for dust came up as an issue to be resolved with the township board.

A miscommunication between the county and township resulted in some property owners in the township paying to have their gravel roads treated with calcium chloride, while neighbors were not charged.  The calcium chloride treatment is used to help lessen the dust coming up from gravel roads when vehicles drive over them.

The township board voted to refund township property owners who were charged due to the miscommunication between the departments.

Stover shed light on the issue of the roads being dusty. Stover read from an email from the company responsible for the gravel road chloridation.

The calcium chloride used to treat gravel roads to keep the dust level down as vehicles travel over them is a hydroscopic salt. The treatment for the gravel roads is effective when there is more moisture available to activate the treatment. The treatment is typically done on roads in the spring, but due to limitations this year, roads were not treated until last week.

According to the company treating the roads, Stover said, there has not been enough rain for the treatment to become effective at this time.

With the primary election coming on Aug. 4, Eull turned his attention to the larger numbers the township is already seeing in participation.

“Last time, we had 1,400 voters in the entire election. So this does not include all the people who are going to come in and vote,” he said of in-person voters.

Eull is hoping to bring in at least one temporary election worker to assist the township with the steep increase in absentee votes.

The Niles Charter Township has more than 10,000 registered voters.