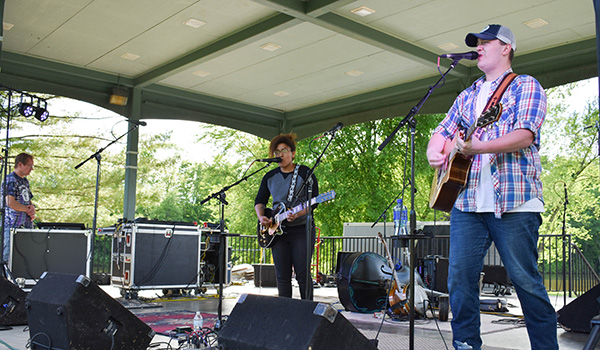 The Riverfront Optimist Club of Niles has hosted the Bluegrass Festival locally in the past. This year, the club is bringing music to town through a different venue: online. It is hosting its first Riverfront Optimist Music Revue on its Facebook page beginning at 1 p.m. on Saturday. (Leader photo)

NILES — While the Riverfront Optimist Club of Niles’ flagship event, the Bluegrass Festival, was not given the go-ahead by the city for 2020, the club is continuing to work on bringing music to the city in a different way.

Due to COVID-19 mandates, outdoor gatherings of more than 250 people are not currently permitted, and the city of Niles has not begun approving many events at this time. This did not stop Josh Sitarz, president of the club, from organizing a show. The venue has changed, but the heart of the event is the same.

“I’m just ready to hear some music,” Sitarz said. “It’s been a while. I’m getting tired of listening to Spotify and YouTube. It would be nice to experience something that appears live. One thing I’ve asked each musician is to ask talk in between sets as if it was live.”

The music will be streamed on the Facebook platform, with pre-recorded sets from each performer. Sitarz said this way the club can eliminate any of the uncertainties that can come with streaming live performances, including upload lag between music and video. The format is intended to provide a more professional production for the artists and viewers.

The eight performances the club booked for the event provide a variety of genres to the event, Sitarz said.

“We have some mixes between jazz and rock and bluegrass,” he said. “We have two bands that have some type of gospel and Christian in there, country and rock. There’s something for everyone.”

This mix of genres is a break from the tradition of the club’s annual Bluegrass Festival.

“When Tom Majerak [club member] and I were putting this together, we liked that each musician had something different instead of the same genre of music back to back,” Sitarz said. “This way, if someone does not like one genre, they can tune in the next hour and watch the next band.”

The funds raised from the event will go to the Riverfront Optimist Club of Niles as members look forward to organizing events for the 2021 year.

“We are trying to host the Bluegrass Festival next, and maybe some other things down the road,” Sitarz said.

“We are still having meetings with phone calls and using Zoom,” Sitarz said. “We were thinking about getting together in Riverfront Park. That way, we could stay distanced from one another.”

The online event for Saturday will feature eight artists from around the region, including:

The event will begin at 1 p.m. on the Riverfront Optimist Club of Niles’ Facebook page. The club will be accepting donations through its PayPal account.

BERRIEN COUNTY —  Non-profit arts organizations of Berrien County have joined forces for one matching grant that will benefit them... read more