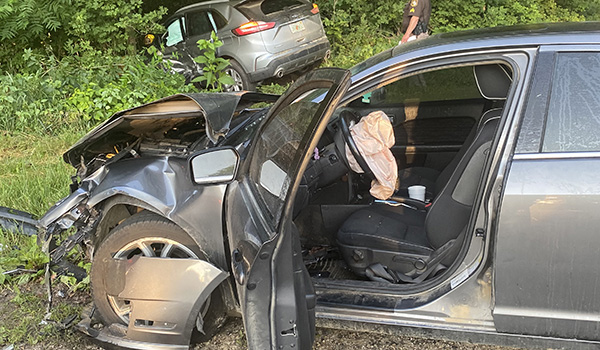 The two vehicles involved in the crash this morning in Penn Township. One person was injured and transported to the hospital in Dowagiac. (Submitted photo)

PENN TOWNSHIP—A New York resident was injured and taken to the hospital after a two-vehicle crash Monday morning.

According to Sheriff Richard J. Behnke of the Cass County Sheriff’s Department, his office was called to investigate a personal injury crash at the intersection of Penn Road and Dutch Settlement in Penn Township.

Yocov Roness, of New York, was southbound when he failed to stop at the intersection. His vehicle collided with an oncoming vehicle driven by Cassandra Jordan, of Marcellus.

Jordan had her two-year old, Weston Jordan, in the vehicle with her. Cassandra and Weston were treated for injuries and released at the scene.

Roness was transported to Ascension Bourgess-Lee Hospital in Dowagiac for further medical treatment.

According to deputies, the case remains under investigation, though it appears that all parties were using their seatbelts and intoxicating substances were not a factor.

NILES — Pop-up libraries for student reading programs are scheduled for three dates over the summer. However, the events will... read more