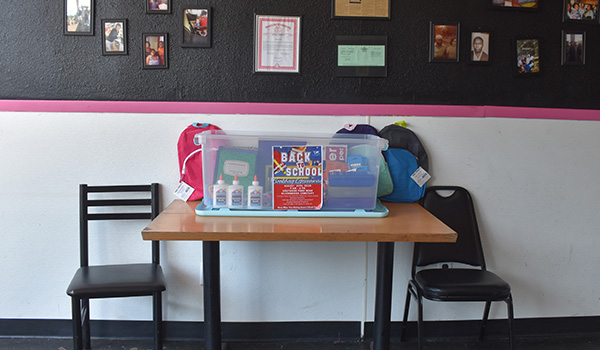 NILES — A box of school supplies sits inside the dining room in Curly Q’s BBQ near the counter where orders are placed. The box has a layer of colorful school supplies including backpacks, crayons, pencils and erasers.

“I’ve known Paula [Watts] for as long as you can know someone. She’s like family,” said Tyler Haines, owner of Curly Q’s BBQ.

“Our motto is ‘from our family to yours.’ We wanted to help,” Haines said.

Curly Q’s BBQ is collecting school supplies for Paula Watts’ nonprofit, Warrior of a Mother. The nonprofit launched a Back2School Backpack Giveaway to give to students in the fall.

While still months away, there are uncertainties surrounding the 2020 to 2021 school year due to the COVID-19 crisis. With the full impact of the crisis still unknown, Watts, a Niles native hopes to help students and parents prepare for the fall.

She is hoping to ease some of those worries by putting together backpacks with school supplies.

“It is my understanding that one of every four children has a hard time getting the [school] supplies that they need at the beginning of the year, and all the way through to the end of the year,” Watts said in a video for the fundraiser.

She recognized the need may be greater this year.

“With COVID-19 going on, I’m sure there are a lot of people who are out of their jobs or it has messed with their money a little bit,” Watts said. “I’ve talked to a few teachers, and they believe that they’re going to go back [to traditional classrooms]. They’re just not sure how they’re going to do it yet. I wanted to be able to give back in a way that I can.”

Watts is aiming to assemble 500 backpacks filled with school supplies for area children. She is currently collecting donations of school supplies and has started a GoFundMe titled “Back2School Backpack Giveaway.” In addition to the GoFundMe, she has a raffle posted publicly from her Facebook profile where she is selling tickets to raise money for the school supplies. The winner of the raffle will win a new Chromebook laptop.

The mission to help children start the school year right is close to Watts’ heart.

One for the driving forces for Watts is her son.

“This is going back to honor him,” she said.

Her son, Bryan Douglas Watts, was 13 when he died on April 1, 2017, at the Quality Inn and Suites in Niles. A carbon monoxide leak resulted from a malfunctioning vent on the hotel’s pool heater, and Bryan succumbed to carbon monoxide poisoning.

Watts no longer lives in Niles, but wanted to give back to her hometown.

“I was born and raised in Niles,” she said. “I moved back, and I was there for a couple of years before I lost my son. That’s where I’m from. That’s where people know us. That’s where the accident happened. We’re very well known there. I just want to give back to my community where I was raised.”

The backpacks are being put together for students attending kindergarten through grade 12.

Families with students who are interested in receiving one of these backpacks can register on the Back2School Backpack Giveaway EventBrite page. Pickup of supplies will be on Aug. 30.