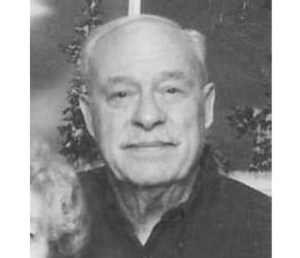 Buz was born on Jan. 11, 1927, to the late Charles and Laura (Sonleiter) Mc Crory at the family home in Niles. He was one of three children growing up in the Mc Crory household.

After completing high school, Buz joined the U.S. Air Force, where he served during World War II as an Airplane Mechanic in the 369th Bomb Squadron. He wed Marjorie, and the two had one son. Marjorie later passed away after a battle with cancer; and his son, Louis Mc Crory Jr., passed away in an automobile accident.

After returning stateside from the Air Force, Buz went to work for Honeywell (Bendix) where he stayed for more than 26 years. Buz was lucky enough to find love once more and in 1973 he wed Mary Lou.

Buz was a Charter Member of the National Hot Rod Association and held many records with his car “The Damn Thing” that he built in their garage. He was a member of several fraternal organizations including The Eagles Lodge, The Moose Lodge and the Elks.

Buz and Mary Lou owned a home in Mackinac where they stayed many summers. While up there, Buz even worked at the TeePee Campground doing maintenance for a few years.

Like many men his age, Buz was a creature of habit. Those habits made him many life-long friends. Daily, you could find him at Duncan’s Kozy Kitchen for breakfast and out for his one mile walk every afternoon. He had many friends and neighbors that looked out for him on his daily activities.

In keeping with Buz’s wishes, he has been cremated and his family will be remembering him privately.