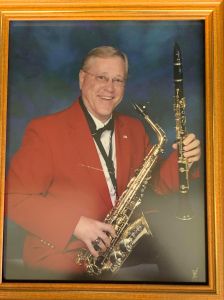 He is survived by his sisters, Judy DePoy Atwood, of Vero Beach, Florida, and Sue DePoy Conner, of Walton, Kentucky; his sons, Erik DePoy, of Moscow, Russia, and Kurt DePoy, of Celina, Texas; and Kristen DePoy Blaeser, of Boxford, Massachusetts.

Dean graduated from Niles High School in 1954 and studied music education at the University of Michigan, where he earned a BA in 1958 and an MA in instrumental music education in 1959.

Dean was a lifelong Wolverine stemming from his days at the University of Michigan, where he met his former wife, Judith. His sister, Judy and son, Erik also studied in Ann Arbor.

During his 22 years in Winter Haven, Dean was a regular player in the Over 55 Show Band, which showcased his lifelong love for playing the clarinet and saxophone.

Under his direction, the Brentwood High School marching band (the “Green Machine”) was a regular winner of awards at local and state marching band championships. The reputation for excellence that his bands earned led to invitations to perform at professional sporting events, including at Shea Stadium and Yankee Stadium.

Dean will be sorely missed by his family and the many students he taught over the years. May he rest in peace.

His urn will be laid to rest at Silverbrook Cemetary in Niles on July 27, 2020, which would have been his 84th birthday.