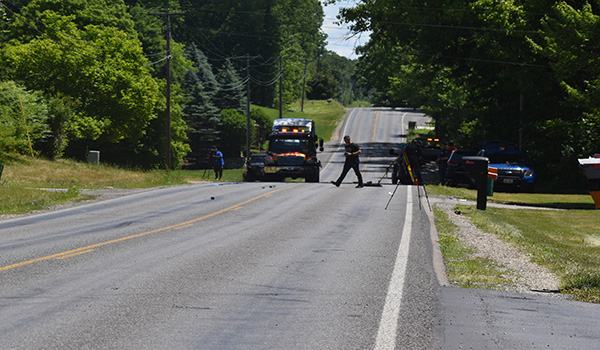 Investigators and Michigan State Police were on the scene of a fatal accident on Redfield Road near Carter Avenue. Around 10 a.m., two passenger vehicles and a motorcyclist were involved in the accident. (Leader photo/CHRISTINA CLARK)

MILTON TOWNSHIP — A motorcyclist has died after a crash reportedly took place at approximately 10:05 a.m. on Redfield Road in Milton Township, near Niles.

According to the Michigan State Police, Nicholas Allen Washburn, 25, of South Bend was the driver of a westbound motorcycle on Redfield Road.

Washburn’s motorcycle collided with a van, stopped southbound on Carter Road at the stop sign. The motorcycle driver was ejected and struck an eastbound vehicle stopped on Redfield Road, waiting to turn left.

The drivers of the two passenger vehicles involved with the crash appeared to be uninjured at this time, according Michigan State Police Lieutenant Jeremy Carlisle.

Washburn was transported to South Bend Memorial Hospital, and was later pronounced deceased from injuries.

Washburn was wearing a helmet at the time of the crash.

The crash remains under investigation, though deputies said speed may have been a factor.

CASSOPOLIS — The Cass County Road Commission has adjusted some services this year due to the COVID-19 pandemic and the... read more