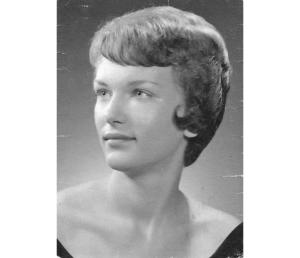 She grew up in Lakeville, Indiana, and Buchanan, where she graduated from high school in 1964.

She married Leonard N. Marrow on Aug. 22, 1964, in a ceremony at the home of her grandmother, Gladys Sarber Cobb. Gloria and her family settled, in Niles, after her husband retired from the Air Force.

She enjoyed spending time with her family and friends. She adored being a grandmother and was very proud of their accomplishments. Gloria trained to be a cosmetologist and eventually to be a cosmetology instructor. She operated her own beauty shop for more than 30 years and had many loyal customers that became friends. Gloria was still working in her shop until her recent illness.

Gloria enjoyed being active. Her favorite activity was spending time with her family or grandchildren. She enjoyed her perennial flowers and would share what she had with anyone who asked. Many friends, family members and customers enjoyed fresh fruits and vegetables from Gloria and Leonard’s garden each year and the homemade treats Gloria would make for the holidays.

Gloria was a volunteer at her children’s schools when they were younger. She was a leader with Fairland 4-H Club for 25 years. Many youths learned to decorate cakes and cook in her kitchen. Later, she volunteered in the commercial buildings at the Berrien County Youth Fair.

Gloria began helping to organize her high school five year reunions. The group enjoyed meeting so much that they eventually began meeting monthly for “Classmate Tuesdays,” for which Gloria would make the monthly reminder calls.

A memorial service will be at 1 p.m. on Friday, June 26, 2020, at Brown Funeral Home with a time of visitation beginning at 11 a.m. Committal will be at Smith’s Chapel Cemetery immediately following the service. Due to the COVID-19 pandemic, the family is honoring Gloria’s wishes and will not be hosting a post-service gathering.

The family expresses its gratitude to Caring Circle Hospice and the excellent care that Gloria received. Gloria’s family will be honoring her memory with a bench at the Berrien County Youth Fairgrounds. All memorial contributions received will be used for that purpose.

Anthony Jervis, 41, of Buchanan, died Tuesday, June 16, 2020. Anthony will be cremated and his family will be remembering... read more