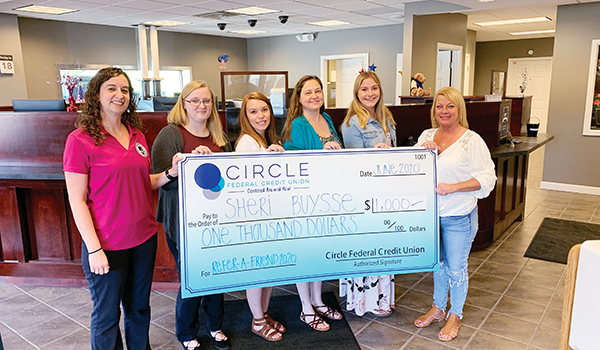 She was a bit baffled when she had messages on her phone from the credit union because as she put it, “usually, it is not a good thing when the bank calls.”

This phone call would be much different. Circle, which was founded in the early 1940s as Kawneer Credit Union and was originally for employees of Kawneer in Niles, was calling Buysse to inform her that she had won $1,000 for referring a friend.

Buysee, like the other members of the credit union, had only to refer a family member, friend, or co-worker to become entered into the contest. They, in turn, had to open an account with Circle.

“I was shocked,” Buysee said. “I had actually forgotten that I even did it. I referred my daughter. I did not even remember until I got the call. So, this call was a good thing.”

The refer-a-friend promotion was hosted in the first quarter of this year and challenged existing members to refer friends, family and co-workers to join the credit union with their referral card.

According to Circle Federal Credit Union, it had a great response, and staff thanked all those who participated.

Buysse already knows what she is going to do with the money.

“I am going to put it toward a new car,” she said Thursday afternoon. “I have been saving my money, so this is going to help me get there a bit quicker. I am a single mom with four kids, so every penny counts.”

NILES — As summer arrives, so too does a higher visibility of the signs of poverty. With more people out... read more