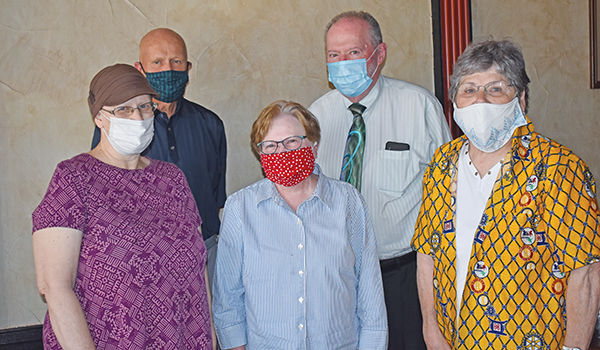 DOWAGIAC — Just after noon Thursday, Woodfire Trattoria was alive with the hum of small talk and cheerful greetings as a group that is used to meeting once a week saw each other for the first time in months.

At one table near the entrance, a group of women worked to tie blue ornaments to white pieces of paper that welcomed back members to meetings of the Dowagiac Rotary Club.

Thursday, the Dowagiac Rotary Club met for the first time since COVID-19 restrictions shut down in-person meetings. The group gathered inside downtown Dowagiac’s Woodfire Trattoria, as its regular meeting space, the Cass County Council on Aging’s Front Street Crossing location, remains closed to the public and could not accommodate the full club meeting at once.

“We didn’t want to start again until we could all meet together,” said club president Melody Wallace.

Wallace said the months without the club were lonely, and not something the club was prepared for. In the 100 years it has been operating in Dowagiac, the club has never experienced a hiatus such as the one COVID-19 forced upon its members.

“I don’t think Rotary has ever been shut down before,” Wallace said with a laugh. “I think this has been a first.”

“Even during World War II, they were meeting and giving out scholarships to college kids,” added longtime member Barbara Groner.

While some Rotary clubs across the globe continued to meet via video conferencing during COVID-19 shutdowns, Wallace said she did not believe that would have been ideal for the Dowagiac club. Though the Dowagiac club discontinued its regular meetings, it did not cease to serve the community. During the shutdown, the club awarded a scholarship to a local high school graduate, sought out grants and supported Dowagiac Union High School yearbooks.

While the club was able to complete some tasks during the shutdown, the pandemic did make it so that the group could not complete some of its 2020 goals, such as hosting a centennial celebration to commemorate the group’s 100 years in Dowagiac. Now Wallace said many of the group’s plans for the 100th anniversary had been pushed to 2021.

Despite the challenges the pandemic has caused, Wallace said she is proud of the Dowagiac Rotary Club and was happy to be reunited with her fellow Rotarians.

“It’s just really great to have everyone together again — it’s exciting,” she said. “I feel like we have had and will continue to have an impact on our community.”

CASSOPOLIS — This August, voters will have the chance to approve funding for an organization that provides care to Cass... read more