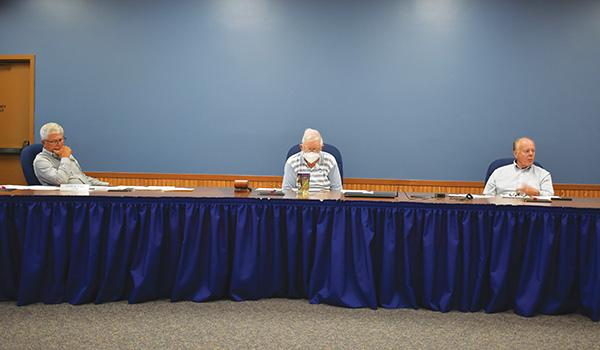 NILES TOWNSHIP — Thick debate between board members filled the meeting at Niles Charter Township’s regular meeting on Monday evening. With seven members of the board present, the public attendance was limited to just three members due to the meeting room’s capacity to host a maximum of 10 individuals due to available space and COVID-19 precautions.

The reopening of the township hall took center stage of discussion once again, as the hall had not yet reopened to the public as originally planned.

In one of the most pressing discussions of the evening, the reopening plan had been written and was ready to be approved. The plan had been distributed to the township hall’s staff.

“It has generated a lot of conversation amongst staff, some good some bad,” said Supervisor Jim Stover.

With the plan being discussed and distributed, Treasurer Jim Ringler acknowledged the township hall had originally been scheduled to reopen to the public on June 8.

“It got postponed to June 15,” Ringler said. “I think the whole board can take a little bit of fault to figure out what it takes to get ready. We have the plan, but we never went over it with the staff. This is government. We need to be open along with everything else, safely. We’re not going to stay closed forever.”

The board members discussed masks, and if mask wearing would be enforced for staff and the public, but came to no clear final guideline on the matter.

The reopening plan was passed by the board in a 6 to 1 vote, with Trustee Richard Cooper voting against, after highlighting the latest executive order from Gov. Gretchen Whitmer informing employees who are able to work from home, should continue to do so.

As of press time, the township office was still readying itself to open to the public June 17.

“It’s just a millage renewal,” Ringler said. “What I’m proposing tonight under new business is that the township approve renewing that millage on the same terms: four years, one mill, for the November election.”

The millage would be equal to $1 out of every $1,000 of property values assessed and taxed. The estimated millage final amount was stated as $424,141 that the township would receive to put toward its contract with the Berrien County Sheriff’s Department.

Board trustee Daniel Pulaski Jr. asked if the estimated amount to be brought in by the millage also helped to cover the sheriff’s department pensions.

“It costs us right around $1 million a year to contract with the Berrien County Sheriff’s Department,” Ringler said. “The only thing the millage raises is about $424,000. The rest of the money comes out of Niles Township general fund.”

He said the township has brought in about $1,250,000 from the state’s general fund in years past. Due to COVID-19 shutdowns and ripple effects on the economy, Ringler expected the fund would yield much less income for the township in the year to come.

Ringler said that the township board could attempt to levy for a higher millage, but he did not believe the voters would approve it.

With the stress of already cutting $180,000 of maintenance across the township, including no road or sidewalk work for the rest of the year, according to clerk Terry Eull, the board will have to make tough decisions through the year. The township will be absorbing the impact of the cost to contract with the Berrien County Sheriff’s Department at the expense of $50,000 a month.

Eull made a note that at an upcoming meeting, language would be changed and voted on for the Niles Township Fire Department, which is currently operating in the red.

The millage language was approved to be added to November’s ballot for voters.

There were several items on the new business agenda for Monday evening:

• The board voted to close the community park rental until further notice, under COVID-19 concerns.

• Appointment of dangerous building enforcement was tabled, due to a lack of clarification of contractual financial responsibilities. The appointment of the contractor will be brought back up when the information is available to all board members.

• The board approved a fireworks application for Orchard Hills Country Club.

Trustee Chris Vella asked if there was any guidance from the Michigan Township Association in regards to fireworks, during COVID-19 regulations.

Ringler clarified that the township was not approving whether Orchard Hills Country Club could host an event. The order of business was if it was a safe activity according to the Niles Township fire chief.

“We’re not the agency that says you can or cannot have it,” Ringler said.

Four injured in collision near Speedway

NILES — A Dowagiac woman was seriously injured in a collision on S. 11th Street in Niles Tuesday, according to... read more