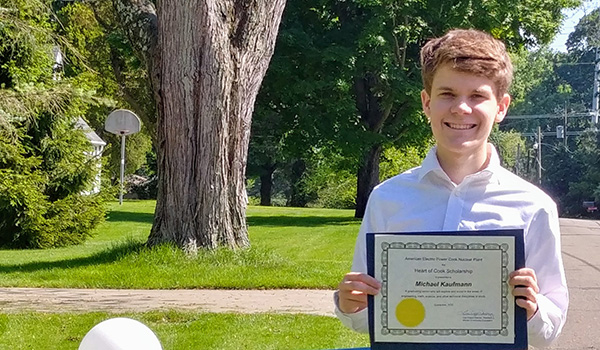 NILES — As Michael Kauffmann, 17, embarked on enjoying his summer after graduating from Niles High School, the class valedictorian was not done acquiring achievements from his high school experience.

“I believe that I wrote about my experience with robotics and how that has impacted me,” Kauffman said.

His former educators celebrated his achievement.

“We are incredibly proud of Michael,” Brawley said. “Achieving valedictorian status is no small feat at Niles High School, and being named a National Merit Finalist is something few achieve across the country. Neither accomplishment is surprising for Michael, as he has proven over and over again that intellectual curiosity, hard work and being an impeccable role model is exactly what he is. Congratulations to Michael for being a great representative of Niles High School.”

After graduation, Kauffmann plans to attend the University of Michigan Ann Arbor to study at its college of engineering. His plan is to earn a bachelor of science in engineering in computer science. The choice to study computer science was influenced by his involvement in FIRST Robotics Competition Team Ground Zero, where he served as programming captain.

“I wasn’t as sure before I started doing robotics,” Kauffmann said. “I’m pretty sure that robotics pretty much made that decision clear.”

He looks forward to being able to study what he enjoys and spend more time in the subject at the university.

“I’m looking forward to learning a lot more about computer science, programming and getting to know new things with that,” he said.

Kauffmann is excited for his next step, but grateful for the support he received in his school system.

“I am thankful for the support that I got through the community to help me with everything in the school system,” he said. “I am glad that I had this opportunity.”

CORRECTION: A previous version of this article misspelled the name of Michael Kauffmann and misstated his distinction. He was named a National Merit Finalist. We regret the errors and are happy to correct them.