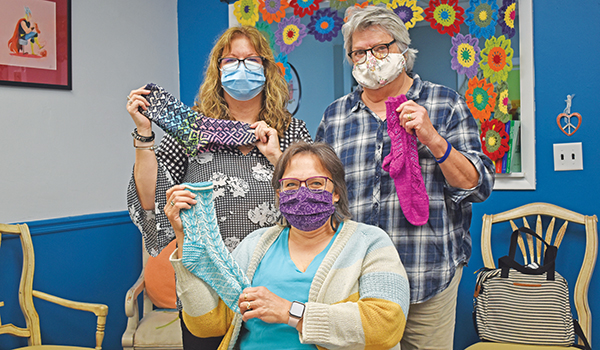 DOWAGIAC — Tuesday morning, three women sat inside downtown Dowagiac’s Yarn on Front, surrounded by dozens of socks in every color, from bright pink to muted purple to serene blue.

As they sorted through their piles, the women laughed as they shared stories about how they made each pair.

“Oh, this one was a tough one,” said Decatur’s Jan Clare as she ran her fingers along the stitches of one of her pairs. “I had to step away and go to my happy place. I was ready to throw in the towel. I thought I was done.”

Recently, members of a Dowagiac knitting club competed in Sock Madness, an international knitting competition hosted by Ravelry, timed to coincide with the National Collegiate Athletic Association’s March Madness basketball tournament. From February to early June, Yarn on Front owner June Nemeth, of Dowagiac, Nanette Anderson, of Dowagiac, and Clare, of Decatur, knitted several pairs of socks, each time racing against the clock to earn a spot in the next round. Out of nearly 1,000 initial competitors, Anderson was one of 25 to make it to the final round of the competition.

“I never thought I would make it that far,” Anderson said.

The competition worked by assigning competitors to one of 25 teams. During each round of the tournament, knitters would be given a certain amount of time to complete a specific sock pattern. The number of spots available on each team diminished each round, and the places would be given to the knitters who successfully completed their pair of socks first. Eventually, 25 spots remained, Anderson, who competed for the first time, in one of them. In the final round, knitters sped to claim first, second or third place. Anderson missed placing in the top three by several hours.

Though neither Anderson, Nemeth or Clare ended up winning the competition, all three said they enjoyed it. The months-long competition caused stress, frustration and even a few tears for the trio — at one point, Nemeth said one sock pattern had her so confused she tried to tear the sock apart with her bare hands. However, the knitters believe they keep coming back to Sock Madness due to the sense of accomplishment it gives them.

“I would never pick a sock out like this to make, but the fact I made it is just so cool,” Anderson said, holding up a purple sock with green beads woven through it. “It’s just a neat experience because you learn a lot of new things and new techniques. All of these socks had something new I had never done before.”

“I own a shop and teach, but there are at least four new techniques I learned,” Nemeth added.

This year, Sock Madness served a bigger purpose for the friend group than just challenging their skills. Since the women became friends a few years ago through Nemeth’s yarn shop and knitting club, they have met regularly to knit together. However, when COVID-19 hit and executive orders kept them from gathering, they said the competition kept them in touch.

“It was really great to have them there and be connected like that,” Clare said.

“We kept encouraging each other, cheering for each other, and I don’t know that I could have done it without being in this group,” Anderson added. “We have always had a community of knitters here, so that was a way for us to still be in that community.”

Now that the competition is over, the three said they are looking forward to again competing in Sock Madness next year. Until then, they are prepared for the upcoming winter with several new, hand-knit pairs of socks to keep them warm.