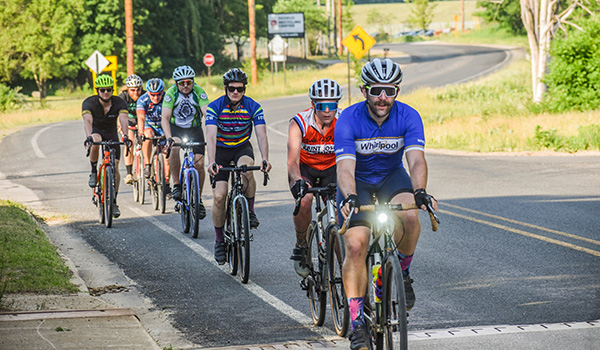 BUCHANAN — While the brewery was closed on Tuesday, the parking lot at River Saint Joe was packed with vehicles.

People unloaded their bicycles from trunks, truck beds and car racks. They assembled in friendly groups, greeting everyone around them. If someone stood alone, they were greeted, and someone inevitably asked about their bicycle. Loose T-shirts, cycling jerseys, special clip-in pedal shoes and tennis shoes alike were seen on the riders. This is the scene for Bike Buchanan’s first group ride of the summer season.

The group’s founder, Liz Martin, created the Bike Buchanan group three years ago. It will continue to meet on at 6:30 p.m. on Tuesday evenings at River Saint Joe brewery to leave on rides. As an organizing force in the area’s cycling community, Martin brings her energy and encouragement to each event. She frequently signs events and posts off with “Peace. Love. Ride a bike.”

Tuesday night’s turnout was the biggest one the group has had yet.

“It was unbelievable,” Martin said. “I honestly wasn’t expecting to see that many members of our community come out and ride bikes.”

The event included three levels of groups to ride with. Martin led the first level, which sets an easygoing pace on pavement for newer or casual riders for 11 miles. The group is a “no-drop” group, meaning no rider is left behind if they are struggling to keep the pace. The pace adjusts to what everyone can maintain. Two other groups were included, which reached between 15 and 20 miles at faster paces. The longest route includes gravel portions of trail to explore.

“I rode [the route] on Sunday,” Trapp said prior to the evening’s launch. “It’s a really pretty ride. It’s gorgeous.”

Trapp said she rides her bicycle at least three times a week outside of Bike Buchanan.

“I’m excited to get people outside to explore and not be at home,” Trapp said. “There’s a community thing with bike riding. Having people come out and ride and then having a beer after.”

The group’s youngest rider, Jacob Wegener, 14, joined the group’s rides after he stumbled across them while riding his own mountain bike.

“Jacob started riding with us last year,” Martin said. “We were staging for one of our rides and he came zooming by on his mountain bike and asked what we were doing. He asked if he could join, and so he did. He saved up all his money and bought himself a sweet bike. It’s nicer than mine.”

Wegener smiled at the comment and readied himself to ride.

As the group grew, it garnered the support of more than just community members. The brewery the group meets at also opens up exclusively for riders after completing the rides, and offers a discount on brews.

“They’re also cyclists. They understand that culture a little bit,” Martin said. “They have been so supportive of Bike Buchanan.”

Martin spoke with participants after the ride was completed on Tuesday evening, and found that her mission to just get people on bicycles resonated through every level.

“It’s kind of fun to listen to people who have been cycling for a long time. It’s just getting on your bike and going,” Martin said. “It’s the same mission and value as someone who is just starting out. You’re just biking where you are, and where your experience level is.”

As the ride had started on Tuesday, the no-drop ride had a delayed start as Martin assisted a rider in putting their bicycle chain back on track.

“Even if you’re just getting started on your bike, I think it’s easy to look around and wonder if this is the right space for you right now,” Martin said. “We will have an option for you wherever you stand on the experience level for biking. We have all been in those shoes.”

NILES — Residents may have received an additional letter with their last water bill. The letter is headed stating that... read more