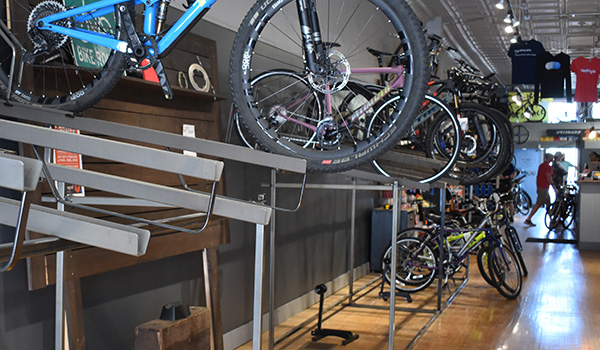 NILES — Sparsely populated bicycle racks greet the eye at the entrance of Inertia Cycleworks, if a customer rolling their freshly repaired two-wheeler out does not first. The guys behind the counter are in constant motion. Between the register, the phone ringing constantly and the bicycles on stands receiving maintenance; there is no time to stop.

Chris Pawielski, owner of Inertia Cycleworks at 211 E. Main St., has had a busy shop ever since the weather became sunny in the southwest Michigan region.

Independent and physically distanced activity was encouraged even during the heaviest parts of Michigan’s COVID-19 mandates. Due to this and people finding themselves with more time for that activity, many turned to their bicycles. However, a shortage of bicycles available and now parts is keeping the shop owner on his toes.

According to Pawielski, bicycle repairs are keeping the shop’s technicians busy, and he is eagerly awaiting word on bicycles he has ordered for the shop.

“Basically, the bike industry has told us that they sold in the vicinity of four to five times the amount of bikes that they expected to sell in [all of] 2020,” Pawielski said. “These are bikes that we ordered before Christmas time to be delivered in the first and second quarter. They’re all gone. They’re telling us another month or so before we can start to get bikes.”

He currently has 100 bikes on order. Three of the shop’s biggest sellers are Specialized, Trek and Niner. He said the shortage is not just impacting his shop, but others in the region as well.

Some of the bicycles visible in the shop’s front being client’s bikes awaiting repair or pickup. Without much in stock, Pawielski is hoping the shop can get what he calls “normal bikes” in for customers soon.

At the beginning of the heavy mandates, when the new bicycle shortage began, the shop had customers calling and driving from Chicago to purchase and pickup new bicycles. Now, the focus has shifted to repairs.

“We always have a wait on repair this time of year,” he said.

However, parts are now becoming fewer and farther between.

“I have nine to 10 vendors, and we’re getting to the point where nobody has a part,” he said. “You need this chain? Nobody has it. You wait and wait. Suddenly, it becomes back in stock. We’re just as the tip of where that’s starting to happen. Up until now, we’ve been able to get the parts and things we need.”

“It’s great that people are out riding their bikes. That’s super cool,” he said. “Even during the heaviest restriction, you could go on a bike ride. I think that’s what it led to,” he said of the resurgence in popularity and scarcity of parts.

“[People are] home. They can’t go to the gym. They can’t do other types of exercise that they’re used to doing,” Pawielski said. “Most people have time now maybe they didn’t have before.”