Accolades came from not only commissioners at last week’s county board meeting but from other county officials and community leaders in a tribute video posted on YouTube. That video can be seen on YouTube at the Berrien County, Michigan page.

As the resolution unanimously approved by commissioners noted, Wolf is a lifelong Berrien County resident whose interest in public service began early when he was a student at St. Joseph High School. He served then in student government, the National Honor Society and other clubs before accepting an appointment to West Point.

Wolf, now 67, graduated from West Point with a bachelor of science degree in 1974 and served on active duty from 1970 to 1979. He eventually retired from the Army Reserve in 2002 with the rank of lieutenant colonel. 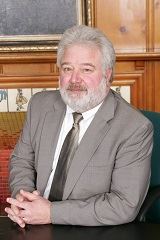 Back in Berrien County, Wolf began taking an active role in the betterment of the community as he served as a city commissioner and then mayor of Benton Harbor. From there, he became the County Treasurer and then the county administrator in 2005.

The resolution in his honor went on to note that Wolf said in his October 2004 County Administrator applicant submission that his goal was to be a responsive, proactive chief operating officer to the Board of Commissioners and a prudent manager of the public’s trust and finances.

He also promised to be a valued partner to the countywide elected officials and a respected mentor, leader, and manager to county employees.

“He has successfully achieved this goal and so much more in the 15 years he has served in that role and he deserves to be honored for all of his service to his community, our county, and our country,” the resolution stated. “Now, therefore, be it hereby resolved that the Berrien County Board of Commissioners recognizes William A. Wolf for his dedicated endless service to Berrien County, thanks him for his efforts to prepare Berrien County for future generations, and wishes him a retirement filled with happiness and good health.”

County Board Chairman McKinley Elliott noted that Wolf became county administrator after a 2004 primary loss to John Proos in the race to become the 79th state representative.

“Do you remember getting a phone call the day after the primary election,” Elliott asked Wolf. “I took on the role of being a political doctor and asked if you would consider applying for the county administrator post. The deadline was two days out and we extended it. It was probably the best thing the board did. It was a good move for you and for the county.”

“The time you spent with the board speaks to your continuous commitment to keep the county on on course says a lot about you, your dedication to your job and your love for the county,” he added. “You have affection for the county and the people who work here. We’ve been blessed to have you.”

Commissioner Mamie Yarbrough was among those thanking Wolf for his service.

“I want to say to you that when you had the interview for the administrator post, I was a citizen in the audience,” she said. “I had come to see if I wanted to be involved and you excelled in your interview.”

“You’re my man, in the city of Benton Harbor too,” she said. “I’m so proud of all your accomplishments. We did not go into debt, you didn’t put us into financial trouble. We’ve used our money to help county and I’m proud to be a part of that. I wish you well.”

“I want to offer a good old-fashioned thank you,” he said. “We’ve accomplished so much with new facilities for animal control and the health department, remodeling the jail facility and buying land and expanding county parks.”

Hinkelman, a former county board chairman, noted Wolf’s efforts in other areas such as turning the county road commission into a county department.

“There are so many things, it’s difficult to list all of them,” he said. “What a blessing you’ve been to taxpayers. You have the thanks of all the commissioners who’ve worked with you.”

For his part, Wolf looked back on not only his 15 years as county administrator but his 50 years of public service back to high school and West Point.

“Being the administrator is the best of the three jobs I’ve had,” he added. “I’ve enjoyed working with the staff. It’s truly a job I’ll remember with forever with tremendous fondness, no matter what the future holds. Thank you all very very much.”

Commissioners hired South Haven City Manager Brian Dissette in late May to succeed Wolf. Dissette starts his new duties July 1, with retired County Administrator Mike Henry serving in that role in the interim. Dissette is no stranger to the county, having started his public service career in 2002 as an intern with Henry in Berrien County.

DOWAGIAC — The Dowagiac Police Department is investigating two separate drive-by shootings that occurred within the city over the weekend.... read more