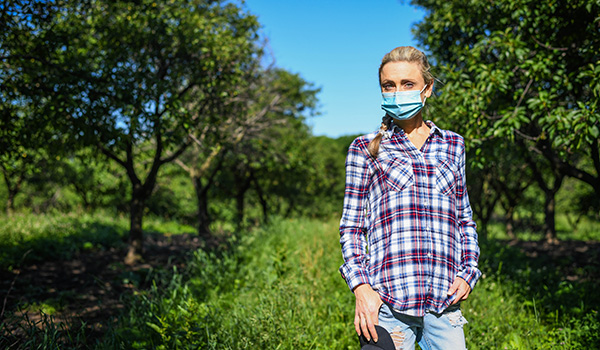 SOUTHWESTERN MICHIGAN — With more than 700 acres, Schilling Family Farms in Eau Claire grows lush groves of fruit trees and tomatoes. The plants grow in in every direction, as far as the eye can see. The farm is now tended to by its fifth generation of the family, and has been grown into a nation-wide fruit and vegetable wholesaler.

For all of this land, the operation hires and houses H-2A and migrant laborers to help get the work done. Freezes and a long, cold, wet spring already presented a certain kind of challenge for it to overcome, but COVID-19 presents a new one.

The sentiment has echoed throughout multiple industries as the busy summer months approach. Workers have begun to arrive to help manage the farm’s crops, and during harvest months, their migrant camps will begin to fill.

Many of the area’s growers employ migrant and H-2A workers, who now have to take more precautions than in years past due to the COVID-19 pandemic.

H-2A visas are granted to temporary agricultural workers through the U.S. Citizenship and Immigration Services office. The visa is a non-immigrant classification, with a maximum stay in the U.S. of three years. There are 84 countries that are on the H-2A Eligible Countries list.

In 2019, the licensed migrant labor housing capacity in Berrien County was 2,674, and 365 in Cass County, according to Bob Wheaton, public information officer with the Michigan Department of Health and Human Services.

Growers who employ H-2A workers provide housing to the workers onsite at the farm. In the past, migrant farm workers would move around the country to where farm work was most plentiful for the season. These populations would many times include families with the workers, increasing the need for housing of peripheral populations as well. Today, single H-2A workers make up much more of the workforce.

“We could estimate that there were at least 3,039 migrant farm workers in [Cass and Berrien] counties, not counting any housing with fewer than five residents,” Wheaton said.

“Under the [H-2A] program, the employer provides the housing, transportation and kitchen facilities or meals,” said Bob Boehm, general manager of Great Lakes Agricultural Labor Services, which is an affiliate of the Michigan Farm Bureau. “Obviously, the farmers are very concerned in making sure of what they need to do, precaution-wise.”

Wheaton added there were approximately 5,000 to 6,000 “seasonal workers” in Berrien and Cass counties, who would not require the same housing requirements as the temporary camps licensed by the Michigan Department of Agriculture and Rural Development.

The migrant and H-2A populations are active, labor workers, and according to experts, transmission is less likely of the COVID-19 virus in open-air settings.

“They’re out doing a lot more instead of staying inside and maybe sharing meals together. These guys are working outside for a tremendous amount of the day, and we know that with the virus a positive is to be out in the fresh air,” Boehm said.

Precautions from the Centers for Disease Control and Prevention, on top of other industry regulations, provided the initial framework for growers to follow. MDARD is in charge of approving migrant housing requirements.

“They are responsible for inspecting the housing and making sure that it meets the codes for cleanliness, hot water, screens and square footage per occupant,” Boehm said. “All of those were based on historic measures trying to limit disease transmission in groups. This isn’t the first concern we have had with contagious diseases. A lot of those regulations were already in place.”

According to the MDARD’s Agricultural Labor Camp License Application for a New Camp, there are four categories of housing: house, hotel/motel, barracks and mobile homes. The application requires the capacity of each housing unit, and gives instruction that the maximum capacity in a unit is the square footage of the unit, divided by 100. Effectively, each worker is required in a normal year to have a 10-foot by 10-foot allowance in a facility.  By these measurements, a 6-foot distance in between workers in living spaces would pose a challenge.

The measures included in the executive order outline what housing owner and operators must do, through June 29 at the end of the order. Regulations such as having beds separated by at least 6 feet in all directions when possible and providing isolation housing for workers who may contract COVID-19, as well as ensuring proper ventilation, and food and water to be delivered to workers who are COVID-19 affected. The measure also states that housing owners and operators must arrange for COVID-19 affected residents to be evaluated by a medical provider.

For Schilling, one of four owner-operators of Schilling Family Farms in Berrien County, the combination of the slow growing season and increase in precautions has allowed the farm to adapt to the new regulations.

“In a way, it has taken a little bit of the pressure off and allowed us extra time to do some of the extra things surrounding COVID-19,” Schilling said.

The workers on their way to the farm in Berrien County spend time together for a few days in their exit city in Mexico. They then have their H-2A interview and sit for a few more days in a group before they travel to the U.S. Because of this, Schilling reasoned the groups were already fairly isolated as it is. With the later arrival of the growing season, the extra time allowed the farm workers to be quarantined upon arrival for seven days.

“There’s a cost for us because we brought [the workers] up here, and making sure we are feeding them because they weren’t earning money,” she said. “Ordinarily, we wouldn’t have to worry about that because they’d be up here and working.”

Another change Schilling Family Farms has had to make is to space out the workers in the mobile homes they are housed in. Historically, the farm employed many migrant families, so the housing is set up to accommodate for that. As of 2020, about 60 percent of its work force is H-2A workers at the peak of the season.

“We would normally have six guys in a trailer, and at the moment, we have limited that to three or four. We have told them that whenever possible, to be a single person to a room,” Schilling said. “Obviously, that’s not always possible. We have also opened a whole other camp early, but haven’t put anybody in it just so that we have the ability to isolate quickly and then care for them separately.”

One of the camps meant for isolation consists of two mobile homes sitting amongst a young cherry field and apple orchards.

Thus far, Schilling Family Farms has not had anyone test positive for COVID-19 in their camps.

“It’s really not a huge risk out here, which is very good for us,” Schilling said, emphasizing the low numbers of positive COVID-19 cases in Berrien and Cass counties.

Due to the congregant nature of H-2A and migrant housing, the Berrien County Health Department and InterCare have been working with local growers to ensure everyone is educated about the risks of transmission and the precautions to be put in place to prevent spreading COVID-19.

Growers work with local health departments and federally qualified health centers, like InterCare. InterCare was founded in 1972, with its sole purpose of taking care of farm workers farm regions of Michigan. Today, migrant farm workers are just 20 percent of the demographic it serves.

InterCare brings its mobile medical van into the camps to provide services. It has followed the national trend of implementing telemedicine as a service as well.

The care that InterCare provides is on a sliding fee. The organization works to help migrant workers with insurance eligibility and partners with other agencies in Michigan assist in supplying workers with items they need, like soap, shampoo and face wash.

Edna Vazquez, manager of Migrant/Family Independence at the Berrien County office of the Michigan Department of Health and Human Services ,also assists growers and H-2A workers in this capacity.

“We’ve developed a rapport with our county farmers, and they let us know when their H-2A workers are coming in,” Vazquez said. “What we’ve done in the past, and prior to COVID-19, is to hold a class in filling out their farmers paperwork. We go and provide translation, and have them fill out an application for emergency medical coverage, which they are eligible for.

InterCare has provided screening and done some testing in the worker camps.

“I think everybody is doing the best they can given the circumstances and realities of their living conditions,” Hendershott said.

Still, if a migrant worker tests positive for COVID-19 and requires hospitalization, there are other things that come into consideration for the worker.

“If someone were to be hospitalized, that’s a different situation between the hospital and the patient,” Hendershott said. “Whether there would be charity care or some write-offs, I suspect they’ve been doing a lot of that for individuals particularly given the unemployment situations. For [InterCare], we do not deny access to care based on inability to pay.”

As the expenses build for growers who are now required to have larger stocks of personal protective equipment, like masks and gloves, than before, Schilling hopes that COVID-19 is a temporary challenge.

“This farm has weathered the ‘storm’ OK,” Schilling said.

Another of the family’s farms, however, faced quite a few challenges in its customer supply chains.

“We had to change everything about that business plan. We had to go all online, because that farm was all direct to farmers markets in Chicago,” Schilling said.

Schilling Family Farms have been in operations since 2018. The farm itself has been in the Schilling family for over 150 years, founded in 1864. The current generation farming it are its fifth. As Schilling looked on through the fields of leafy trees growing apples and cherries, she hoped that the workers and the farm itself would continue to get through the pandemic unscathed.

“We’ve got a big history,” Schilling said. “We’re hoping that COVID-19 is just a blip in the road.”

CASSOPOLIS — A Niles youth is going to prison after being sentenced for third-degree criminal sexual conduct in Cass County... read more