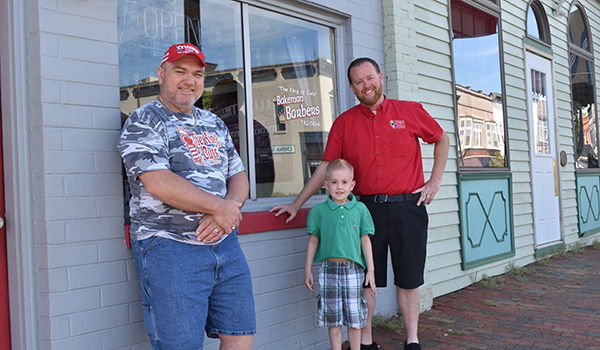 SOUTHWEST MICHIGAN — One of Brandon Truitt’s favorite facts about his Edwardsburg barbershop is that he can say it is where his grandfather received his first haircut.

“I’ve always thought that was really neat,” the Tru Barbers owner said. “Obviously, this place has been through a million makeovers since then, but I still think it’s really cool.”

Though Truitt has only been cutting hair for a decade, the building he works in, 26799 Main St., Edwardsburg, has housed a barbershop for more than 100 years. For the past three months, the shop has sat empty to comply with Michigan’s “Stay Home, Stay Safe” order to slow the spread of COVID-19.

Truitt said the past few months have been hard on him as they have kept him — and the building — from doing what he loves: cutting hair. On Monday, Truitt will again be in his shop, a pair of scissors in hand, ready to get back to work.

“I was extremely excited when I heard we could reopen,” Truitt said. “I’m a little bit excited, but nervous because of so many things we had to get done to follow all the new regulations and rules to get people ready to come in.”

Last week, Gov. Gretchen Whitmer announced personal service shops, such as barbershops, tattoo parlors, and hair and nail salons could reopen to the public Monday, following months of COVID-19 related closures. When those businesses open, they are required to hold to strict personal safety and sanitization measures. Shops must keep records of customers and their contact information, limit the number of people inside the shop, remove self-serve refreshments and reading materials in waiting areas, and require both customers and employees to wear face coverings at all times. If a mask must be removed to provide services, employees must wear face shields or goggles.

With opening just a few days away, southwest Michigan barbers say they are ready to get back to work, but worry the new, strict guidelines could affect their businesses even further.

For Truitt, adjusting to the new guidelines has meant buying thousands of dollars’ worth of personal protection equipment, facemasks and cleaners. Previously a walk-in only shop, he has also had to restructure his business to move to appointment only.

“Being a walk-in, I didn’t have anyone’s contact information to let them know we were reopening,” Truitt said. “We are really going above and beyond, taking temps at the door, only allowing one person in at a time, and of course, everyone is going to sign in.”

In Dowagiac, Pat Bakeman, of Bakeman Barbers, said he thought last week’s announcement that he could reopen his business was “about time.”

To reopen, he has invested between $5,000 and $6,000 in PPE, cleaning products and hand sanitizer. Bakeman has also invested in a tablet and other materials to allow for contactless pay options.

Bakeman said the extra costs associated with reopening were hard to swallow — on top of months of lost revenue — as he believes that Michigan barbers are already held to strict sanitization guidelines as part of their licensing.

“None of this makes sense,” Bakeman said. “Take, for example, the contact tracing we have to do. We have to do that, but the big stores, even the gas stations, don’t have to do that. I guarantee I have two weeks of work in just changing my business model to appointments.”

Though he believes some of the new guidelines for personal care services are excessive, Bakeman said he would do whatever is necessary to keep his clients safe and comfortable.

The costs to barbershops and salons reach further than equipment owners have had to purchase to comply with state guidelines. Limitations on the number of people who can be in a shop at any one time and the stringent sanitization procedures they need to follow after a customer leaves will cut into valuable appointment times, limiting their customers and eating up potential profits. Additionally, both Bakeman and Truitt said they have already lost business to regulars who crossed state lines to get their haircut, as neighboring Indiana allowed personal care services to open weeks ago. To compensate, many barbers across the state have announced that they will be raising their prices.

Despite the financial struggles they have faced and that are still ahead, both Bakeman and Truitt said they are ready to get back to work and are thankful to their respective communities for supporting them through the shutdown. Every day Bakeman has been in his shop he has had people knock on the door to let him know they are eager for him to return, while Truitt has booked more than 100 appointments in the last week.

“The one thing that has really helped is the people that just called to say, ‘hey, are you doing OK?’” Bakeman said. “They didn’t want a haircut or anything. They just care about you.”

With the community’s support, Truitt said he believes Michigan barbershops will adjust to the new regulations and bounce back from their losses.

“People seem really excited, and hopefully, we will be back to a normal situation soon,” Truitt said. “For me, I started my business from scratch, and if I have to do it again, I will.”

Fernwood to reopen to all Tuesday

NILES — A popular southwest Michigan attraction will reopen to the general public Tuesday, following an extended closure due to... read more