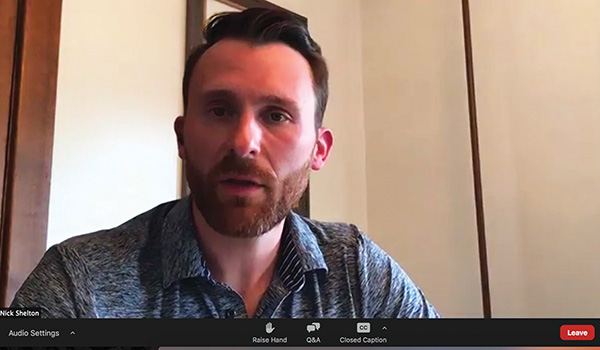 NILES — The evening skies the weekend of July 4 may yet be filled with color and light. A beloved tradition to celebrate Independence Day has been a topic of local concern regarding Michigan’s COVID-19 mandates.

The Niles City Council’s regularly scheduled meeting, hosted on Zoom, brought passionate statements about safety and progress throughout the meeting. One of the biggest items on the agenda, the Fourth of July fireworks, brought out concerns surrounding COVID-19 mandates and precautions, as well as eagerness to celebrate the U.S.

This year, a nonprofit will be in charge of hosting the event.

“With some of the COVID-19 restrictions lifting there is a possibility that the Fourth could be celebrated with fireworks,” Huff’s report and item for consideration read. “There are several items that will have to fall into place.”

The discussion moved forward, mentioning an agreement with the Apple Fest Committee to use the Four Flags Area Apple Festival grounds and the airport as a launch site for the fireworks.

Huff said a donation had been received in the amount of $2,500 toward the event.

“The governor has hinted that she intends to be at Phase 5 [of state’s reopening plan] by Fourth of July,” Huff said.

According to the state’s website, Phase 5 is titled “Containing,” and makes allowances for travel, live instruction at schools, restaurants and bars and increased gathering sizes.

“We want the safety of the people and the community,” Boggs said. “It’s usually a really, really big crowd of people that come in for the Fourth of July.”

There was some discussion of placing a contingency on the event to acquire the needed funding in order to fund the event. The concerns raised, outside of executive orders, were those of making sure the fundraisers could fully fund the event.

“Can we see about amending this that if all the contingencies are met within 10 to 12 days, so that we don’t let this train leave the station and be left holding the bag at the end of the tracks?” council member Jessica Nelson, fourth ward, asked.

Council member John DiCostanzo, fourth ward, moved to vote on the item as written, without a contingency for funding within 10 to 12 days.

Mayor Nick Shelton mentioned that St. Joseph canceled its Fourth of July fireworks. Berrien Springs will be hosting its fireworks at the Berrien County fairgrounds, presenting a different situation than Niles currently has.

“What I do know is that we are celebrating our freedoms on the Fourth of July. I think this would be a huge morale booster for a community that has been dealing with a pandemic for a very long time,” he said.

The council voted five for the fireworks, with three against, allowing the Fourth of July fireworks item to pass.

Another area of concern for discussion at Monday night’s meeting concerned the new Drive and Shine, 518 S. 11th St.

The item approved the Brownfield Plan amendment to include the development.

As Drive and Shine’s owners are redeveloping “four contaminated and functionally obsolete parcels within the city of Niles,” according to the agenda. Over the 30-year life of the plan, the developer of the four parcels may recover costs of cleaning up and developing the land.

At the end of the meeting, several council members made statements pertaining to the protests across the nation in response to George Floyd’s death at the hands of a white Minneapolis police officer.

“The issue of racism in this country is a big, big, big problem,” said council member Travis Timm, second ward. “We have to get to a point as a society and as humanity that when you see those kinds of things, you just don’t let it go, you need to stand up and do what’s right.”

Charlie McAfee, third ward, sent her sympathies and prayers to those touched by the coronavirus, the family of George Floyd and to the protestors.

“As I watched this thing that was going on, in my mind and my thoughts they, ran way, way, way back to many, many years ago of all the marches that I’ve been a part of,” McAfee said. “All of the sit-ins and all the barriers we’ve had to break, and yet today it seems like we’re in the same spot.”

She said the moment in the video taken of George Floyd when he calls out to his mother touched many.

“It made you think, what if this was my child?” McAfee said.

DOWAGIAC — A new way for residents to take care of city business is coming to Dowagiac. Monday evening, the... read more