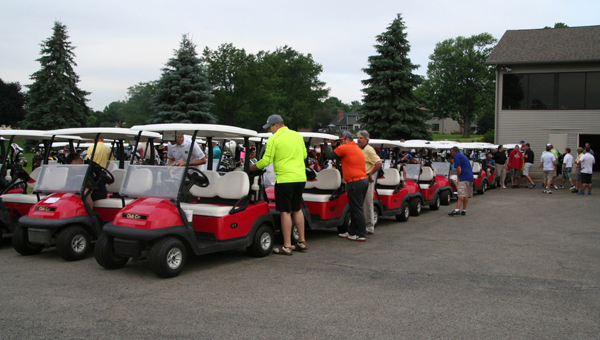 10th Curran golf outing to go on as scheduled

NILES — A decade after its debut, the Pat Curran Memorial Scholarship Fund Golf Outing will go on as scheduled.

Instead of canceling the outing earlier this spring, Diana and Jim Curran decided to hold off and see if the 10th annual event could still be hosted at Juday Creek Golf Course on June 27.

Their patience paid off.

Curran said that he played at Juday Creek about a month ago, and he thought the staff were doing an “excellent job” of sanitizing the carts, sending people out one person to a cart, and raising the cups up on the greens a bit so that he only had to hit the cup instead of it falling in. That way, no one had to take out the flags or reach down inside the cup.

Over the past 10 years, the outing, which is in the memory of Patrick Curran, who was killed in 2010 after being struck by a car while riding his motorcycle, has continued to grow.

“We started out with about 25 teams. Now we average around 30 to 35 teams,” Curran said. “The outing has gotten better and better. Plus, now we have around 50 sponsors. It really has gathered a lot of steam.”

Part of the reason for the success of the outing is that so many people knew Patrick, according to his father.

“Patrick was active,” he said. “He was a 2002 Brandywine graduate, and I think one of the main reasons he knew as many kids in Niles as he did Brandywine was his playing baseball down at Thomas Stadium. He got to a lot of people. Diana and I are Niles alumni from the 1970s. When we move back to the area some 20 years ago, we moved into Brandywine, and that is why we selected both to receive a scholarship.”

Because Patrick loved taking things apart and putting them back together, one Brandywine and one Niles student interested in career, technical or vocational education studies, are the primary focus for the recipients, Curran said.

Golfers can still register for the outing. Cost is $65 per person, which includes golf and a meal immediately following the outing at Jay’s Lounge. Registration begins at 7 a.m. at Juday Creek, with a shotgun start at 8 a.m. for the golf.

With restrictions still in place due to COVID-19, the outing will adhere to social distancing, both at the golf course and at Jay’s Lounge, where dinner is served following the outing.

“We can do that fine down there,” Curran said. “We are going to take the necessary precautions. We are primarily using Jay’s outside area anyway, so we are not physically in the building, so I think we will be alright.”

Curran said that he and his wife have been amazed by the support for the outing, as well as the quality of the scholarship applicants.

“We have gotten thank you letters,” he said. “We have probably had three or four that after two years or four years got a hold of us and told us how they did, that they graduated, what they graduated with and what they are going to do. We have also had the recipients show up at the golf outing and talk to the golfers.”

Golfers may register online at PatCurranMemorialFund.com. Payment and registration is due by June 22. Checks should be made payable to Pat Scramble and mailed to 1347 LaSalle Ave., Niles, MI 49120.