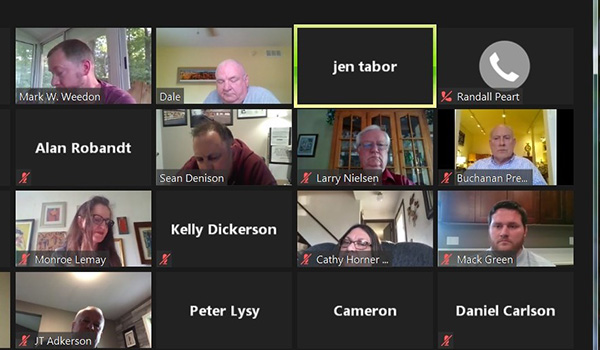 BUCHANAN – A change is coming to Buchanan’s downtown business community.

The Buchanan City Commission took the first steps toward dissolving the Buchanan Downtown Development Authority at their virtual meeting Monday night. The DDA has been in existence for over 40 years and completed many projects to benefit the downtown.

Monday’s vote calls for city staff to prepare an ordinance to dissolve the DDA for the commission’s review. Mayor Patricia Moore made the motion to ask for the ordinance to be prepared and cited reasons such as declining revenue coming into the DDA, changes in state tax law and the DDA having fulfilled its mission.

As it stands after Monday’s vote, commissioners will host a public hearing at the start of their June 22 meeting to gather more public input and then consider the dissolution ordinance that will be prepared.

City Manager Bill Marx said he expects the actual vote on dissolving the DDA to come at one of the commission’s July meetings.

The DDA and the city have been at odds for more than a year. DDA members have claimed that city officials have drained DDA reserves and kept them from having enough money to spend on downtown projects. City officials have said that the DDA has become a divisive body that is hindering the city’s progress.

Monday’s action came after commissioners received a report last month from an ad hoc committee studying the situation over the last several months. It also came after more than a half hour of public comments in favor of keeping the DDA at the start of Monday’s meeting.

“In my view, both sides are in agreement that we can’t continue the status quo,” Moore said. “The [DDA] board as it is right now is not able to continue to help the city move forward to deliver what we need to do for the downtown. Keeping the status quo is not what we’re looking at, we need to dissolve the DDA or keep it with new members.”

She noted that changes in state law regarding property taxes means that the DDA’s revenue source through tax incremental financing will continue to decline.

“That means less and less money for the DDA and them having less and less ability to complete the projects they want to do,” she added.

Her motion ended up passing on a 4-1 vote with Denison, Weedon and Dale Toerne joining her in voting yes and Cameron Downey voting no. It also came after a motion by Downey to postpone any decision until two new commissioners are elected in November and a new city manager is hired later this year died for lack of a second.

“This is too important an issue to let it happen right now the way it’s going down,” Downey said. “My problem is that we’re going to waste city staff’s time writing an ordinance. If we vote to keep the DDA intact, it’s a waste of city time. The process should be left to the next commission and manager and not saddle them with this decision.”

“I’m sick of this topic,” he said. “Everyone wants change until they get change. They wanted to ad hoc committee to hurry up and now, whoa, hold up. No matter what we do, no one is happy. We can all agree that the current DDA board is ineffective and doesn’t work. All I’m asking for is to try something different.”

The 35 minutes of public comment at the start of Monday’s meeting featured statements from past and present DDA members and numerous downtown business owners. All those speaking agreed that they want to see the DDA continue its work in promoting and helping the downtown.

A number of those speaking mentioned that downtown development authorities are one of the most “democratic” groups in local government. “It’s the most democratic form of economic development,” Burck said. “A vote against the DDA is a vote against direct democracy.”

Current DDA Chairman Joe Paolucci said he does not believe the city has authority outside of the DDA to make loans and grants to downtown businesses for façade improvements.

“You can say goodbye to façade improvements if you don’t have the DDA,” he said.

“Please take a longer perspective than just listing the DDA’s faults,” he said. “It has existed for 40 years. It has a legal structure and goals.”

He said the DDA has served as a check on City Hall and city hall abuses.

“There has been an all-out assault on the DDA this last year,” he said. “The DDA asked for fiscal accountability. It’s the only check on city hall abuse of power.”

He said after the meeting that he and others who moved to Buchanan and invested in the downtown are now questioning their decisions to do so.

“Many of us invested and moved here because we believed Buchanan wanted change,” he said. “We were excited about contributing knowledge, talent, and our financial resources to help rebuild a dying community.  We massively over invested in our properties because we believed in the future of Buchanan. All of this was to no avail.”

Resident Monroe Lemay said the city can accomplish more if people are united rather than divided. She suggested that commissioners voting to dissolve the DDA would be breaking the contract they signed with residents when they ran and were elected.

“When you run and get elected, you’re signing a contract with the town,” she said. “Let me ask you, do you want your legacy to be dissolving the DDA? You don’t want to be remembered for that.”

NOVAK: As we inch closer to restarting, do not let your guard down

As we inch ever closer to restarting high school sports, now is not the time to relax and let our... read more