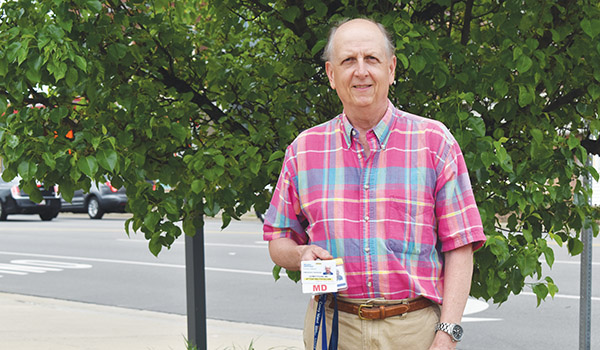 It happened that one of the hardest-hit areas was New York City, where he lived for several years. Feeling drawn to his former home, Pound said he signed up to volunteer the first chance he got.

Pound, an emergency physician in Michigan since 1986, spent April 8 to 26 volunteering at NYC hospitals. Though COVID-19 cases in NYC have since dwindled, Pound arrived right at the pandemic’s peak.

During the time he was there, Pound worked in full protective equipment, including mask, face shield and gloves, directly treating COVID-19 patients in the emergency room for 12-hour shifts. Though the equipment was hot and left his face chaffed, he said he was ready to get to work.

“I wasn’t afraid. I’m basically healthy. I, of course, would not want to get a severe case of COVID, but whenever I’ve worked in the E.R. in the hospital, I usually don’t get ill from other people’s illnesses,” he said. “I tried to volunteer for the [United States Naval Ship] Comfort after Gov. [Andrew] Cuomo asked for volunteers, but I found out the USNS was not taking volunteers. I then volunteered for NYC, as they were looking for many types of physicians, including emergency.”

“I learned the COVID-19 disease isn’t just a viral pneumonia,” Gomer said. “In some patients, such as the elderly and those with certain pre-existing medical conditions, the virus affects end organs through a tendency for the patient’s blood to form small clots when the blood should not be clotting. This clotting causes damage to the lungs, kidneys, heart and even the brain. This end organ disease makes COVID-19 much more deadly if a patient develops the clotting problem.”

Pound worked with patients on ventilators, many of whom he said did not recover. The hardest thing for him was knowing that many of his most severe patients died without being able to see families due to COVID-19 precautions.

Despite the tragedy he saw, Pound said he would dive right back in and volunteer wherever he is needed if he could do things over again. After all, Pound is no stranger to volunteering. He also volunteered in 2005 following Hurricane Katrina.

“I feel like [volunteers] helped,” he said. “Like I told the doctors when I arrived, ‘I’m here to ease your burden and give you some relief. I’m here to help you smile. That’s why I’m here.’ I think we did that.”

EDWARDSBURG — Edwardsburg teachers, staff and administrators lined up in front of the middle and high school to send off... read more