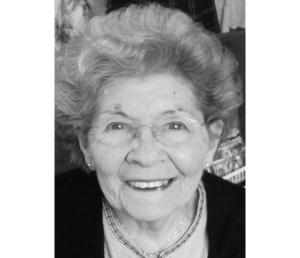 She was born on July 20, 1927, in Sopron, Hungary to Istvan and Margit (Fliegenschnee) Somogyi. She was employed in Sopron in the restaurant of her grandmother, and there she met the love of her life, Kornel Borzsei, to whom she was wed on March 15, 1952.

During the Hungarian Revolution of 1956, Eva and Kornel escaped with their two infant children to immigrate into the U.S. for an opportunity give their children a better life. Their American sponsors were the Nicholas Ratkay Family of South Bend.

Eva took pride in becoming an American citizen and worked hard at learning the English language by watching television and reading the dictionary. At the same time, she taught her children all the Hungarian motherland’s traditions, customs and heritage. She was a brave and wonderful wife and mother, who was always concerned about others before herself. The needs of her family came first, and she genuinely enjoyed raising her children, and then later in life spending time with her grandchildren and great-grandchildren.

Her first job in the U.S. was working in the kitchen and Saint Mary’s Academy where they also found housing for their family while Kornel worked three jobs to make ends meet. Eventually they moved to Niles and opened Niles Janitor Service where Eva kept the books while raising their three children.

Eva loved to spend time outdoors, using her natural “green thumb” to maintain vegetable and flower gardens, especially the African violets. She had more than 100 plants, and she was proud that they were of such size and beauty that the local flower shop purchased plants from her. She also enjoyed watching her bird feeders and all the different birds; her favorites were the hummingbirds and the Baltimore orioles. She joyfully watched for deer, especially when the fawns were running around the yard. She would inform her family that a new “Rudolph” was training in the backyard.

She was an amazing cook, known by all for her incredible Hungarian pastries which she loved to bake, and which disappeared as quickly as she could make them. Her cooking included seasonal produce from her garden, and home canned and frozen produce in the off-season. Herself, she loved eating chocolates, occasionally accompanied by a favorite wine or spirit.

Eva had a beautiful singing voice which her family enjoyed daily. The most special treat was at Christmas when she sang the traditional Hungarian and American Christmas carols. After arriving in the U.S., she became a great fan of Elvis and followed his career throughout his life, including attending his concert at Notre Dame. Since then, she has attended concerts of vocalists Andrea Bocelli, Tony Bennett, Michael Buble, and Brett Michaels. She was thrilled to converse in Hungarian with fellow Hungarian, Gene Simmons of the band Kiss and sing a Hungarian song with him.

When not in the garden or kitchen she enjoyed playing cards, board games, and darts especially with her grandchildren, and watching television shows and old Westerns. She looked forward to annual miniature golf outings with her grandchildren, enjoyed a bit of traditional golf, and had attended Professional Golf Tournaments, always watching for her favorite golfer, Phil Michelson who she was thrilled to meet once, receiving a photograph and a hug.

Eva was preceded in death by her husband, her parents, a stillborn son, and her sister, Margit “Maco” Gombos.

Surviving family includes her loving children, Ildiko, Thomas, and Leslie Borzsei, all of Niles; and grandchildren and great-grandchildren.

Private prayers for Eva Borzsei were offered Monday morning by the Rev. Christian Johnston of Saint Mary Catholic Church in Niles. The family is planning an opportunity to share memories and honor the life of Eva in the near future. Arrangements were made at the Halbritter-Wickens Funeral Home, 615 East Main St. in Niles. Contributions in memory of Eva may be made to Saint Mary Catholic Church, 219 S. State St., Niles, Michigan, 49210; stmarysniles.org. During this time of limited social contact, please continue in personal contact using greeting cards and the postal service or with online condolences which may be left at: halbritterwickens.com.

Eva lived! She could have accepted the life that was given to her, but instead she made choices which resulted in every 24 hours ending better than they started. Instead of just gardening, she produced food for her family and flowers for resale. Instead of just attending public events, she met celebrities. Instead of raising children, she taught them to embrace two cultures. Eva made her life wonderful, and our lives are better for her testimony.