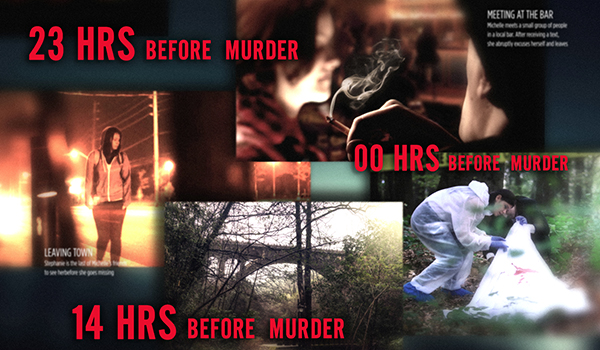 This is the third time the Tarwacki murders have been the subject of a documentary on the Investigation Discovery channel. The first documentary aired in 2014 and the second in 2016. The focus in 2014 was on the victims’ family and friends, while the 2016 show highlighted Carolyn Tarwacki’s love of music and the couple’s impact on the community.

In the upcoming new show, the focus is more on the investigation and the work of detectives over more than two years to solve the murders. Keith Lintz was arrested in the fall of 2012 and convicted of first-degree murder in their deaths a year later. He is now serving a sentence of life in prison without parole.

The 2010 murders shocked the local community. Both worked for the Quinlan & Fabish music company in Stevensville, and Carolyn was especially well known with area high schools where she assisted bands and music programs.

The crime also was shocking for its brutality and the fact that no one was arrested right away. The couple was stabbed, shot and beaten inside their home. People were left wondering who could have killed the couple as days turned into weeks, weeks into months and months into years before Lintz was arrested.

“Detective Kristen Daly knew Carolyn Tarwacki, and therefore, this case, was very personal to her,” said show producer Christie Callan-Jones. “She felt a lot of responsibility to solve the case.”

For his part, Bailey, who took Suarez’s position after the latter retired, said this week that all the detectives and investigators worked tirelessly to follow hundreds of leads and tips that helped them eventually to solve the case.

Bailey said he and Suarez have talked over the years about why this case is still of such interest.

“It was almost a cold case, and there was no DNA,” he said. “It took a lot of running around and leg work. This is a quiet neighborhood where there were only one or two police calls ever.

“I think the case piques people’s interest,” he added. “Here was a homicide where there were no suspects and people were coming forward with just pieces of information. There’s also the fact that there are questions such as why he did it that we’ve never been able to answer.”

Suarez calls the Tarwacki case as “that one case that will always stay” with him.

“This one is certainly mine,” he said. “Even just talking about this, I can feel my anxiety level and breathing changing. This is how much this case affected me.

“In my 20 years as the Niles Post Detective Sergeant, I worked many homicide cases but this one really impacted me physically,” he said. “I don’t think the public really realizes how much these cases impact the persons who investigate them.”

Suarez, who now lives in Tennessee, said he tries to find the positive in the case despite how horrific the crime was and how strenuous the investigation was.

“I met some great people who were relatives of the victims, in particular Sharon McKnight, John Tarwacki, Sr. and Dollie Frick, the parents,” he said.

He said he didn’t want to participate in this latest show, but did so to represent the parents and others. He does not expect he will watch the show.

“Even in retirement, sleep doesn’t come easy these days,” he said.

During the investigation, Bailey and Suarez traveled to three other states: Indiana, Pennsylvania and Tennessee to conduct interviews for the case. In Tennessee, they interviewed a woman who Lintz allegedly beat severely. In all, 725 tips were received and 381 people were interviewed.

The synopsis for the June 11 show mentions what was one of the very first leads investigators had: footprints in the snow.

“When a small town Michigan couple is gunned down in their own home, footprints in the snow and loose lips will lead police to their killer,” the show’s website states.

Callan-Jones said the aim of this show and others in the “Time to Kill” series is to focus on the detectives’ work.

“In this series, we aim to highlight the detectives’ story, and the work involved in solving extremely challenging murder cases by focusing on the timeline of the victims’ last 24 hours and how they interacted with various suspects,” she said.

“Each episode retraces every key step in the investigation as it happened in real life,” she added. “These cases required serious police legwork — interviewing people … dealing with crime scene evidence. We are looking to deliver not only an authentic whodunit murder case, but also a lesson in how to solve them from the people who solved the case.”

When asked why this case remains of such interest, Callan-Jones said it was both the brutality of the murders and the fact that the crime remains so senseless.

“It was a brutal murder of a beloved couple in a small town, which galvanized the entire community,” she said. “John and Carolyn Tarwacki, who were recently married, were getting ready for work, going about their day. It was a senseless. Even today, it makes no sense. [It] is especially tragic for their family and friends as they had their entire lives ahead of them.”